AIB’s IPO plans could hinge on timing of election 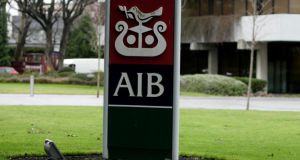 AIB has repeatedly said it is ready to proceed with an IPO whenever Minister for Finance Michael Noonan presses the button. Photograph by Cyril Byrne

The appointment this week of Gordon MRM and London-based Citigate Dewe Rogerson as public relations advisers to the Department of Finance in respect of a proposed AIB stock-market flotation is yet another strong signal that the long-talked about flotation will happen this year.

The bank has repeatedly said it is ready to go whenever Minister for Finance Michael Noonan presses the button. For his part, the Minister has flagged May/June as the first window of opportunity this year.

The publication of AIB’s full-year results on March 2nd will be another step along the road, with the possibility of the bank announcing the payment of a dividend to the State.

A flotation is subject to market conditions, or course. Adverse sentiment towards the banking sector globally scuppered plans for a listing in 2016.

However, a bigger threat to an AIB IPO this year is arguably a general election. Time appears to be running out for Taoiseach Enda Kenny in the wake of his sloppy handling of the Maurice McCabe/Tusla issue this week.

His replacement in the near term as leader of Fine Gael by the likes of Simon Coveney or Leo Varadkar would not change the narrative for a flotation of AIB shares but it might prompt Fianna Fáil to pull the plug on its support for the minority Government and go to the polls. The timing of an election could have consequences for AIB’s plans to go to market.