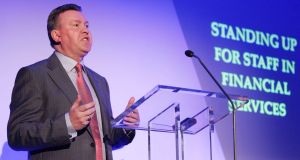 The Financial Services Union (FSU) has called on politicians in Northern Ireland to formulate a strategy for the sector that would minimise bank branch closures, improve governance, and identify foreign direct investment opportunities to counter the impact of Brexit on the local economy.

A six-page policy document has been circulated by the FSU to all political parties and independent candidates who are contesting the Northern Ireland Assembly elections next month.

It also wants a commitment from all financial institutions that they would ensure that at least one bank branch would remain open in each town or locality.

The FSU has called for the Department of Finance in the North to place a six-month stay on any proposed branch closure while appointing an independent consultant to oversee the impact on stakeholders.

The union wants the consultant’s report to be published and for the banks to bear all of the costs. It suggests staff should have the option of redeployment or voluntary severance and not be faced with compulsory redundancies in the event of a branch closing.

To help avoid another crash in the sector, the FSU has outlined changes to board governance and culture that it would like to see implemented, including a “move away from target-based sales growth as the main evaluation of success” in the sector.

“Far greater focus needs to be placed on customer service and value for money, transparency and long-term success rather than short-term indices,” it argues.

FSU general secretary Larry Broderick said banking and financial services could be growth areas for the Northern Ireland economy if a long-term vision is formulated by policymakers.

“Employment in the banking and financial services sector is growing and it forms a very significant element of Northern Ireland’s economy,” he said. “However, a number of factors – including Brexit and an increasingly competitive global market – represent significant challenges for the future. We need a vision and a strategy for the sector if it is to grow and add to the Northern Ireland economy.”

Some 33,000 workers are employed across the financial services sector in Northern Ireland, according to the FSU, which has about 4,000 members in the province.

Mr Broderick said Brexit posed a major challenge to Northern Ireland, which has been successful in recent years in attracting “near-shore” activity. This involves large London-based groups locating distinct parts of their business, such as software development or legal services, in the province.

“These are activities that should not necessarily be affected by any relocation of bank operations post-Brexit and we need to plan now for how we retain and expand the numbers employed in this sector,” he said.