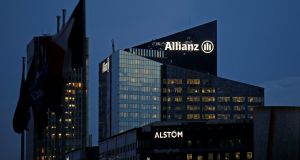 The company is targeting an operating profit from €10.3 billion to €11.3 billion this year. Photograph: Jacky Naegelen/Reuters

Insurer Allianz toned down its deal ambitions on Friday after failing to pin down suitable deals to use cash it had set aside, announcing a bigger-than-expected share buyback and more generous 2016 dividend.

“I think we can deliver all our targets internally,” chief financial officer Dieter Wemmer said after the Munich-based group said it would return its unused acquisition budget of up to €3 billion to shareholders.

“If an acquisition fits our business and our future strategy, and we can add it, certainly we are looking at it. But it is not a must for us, it is a ‘can’,” Mr Wemmer said.

Allianz reached its end-2016 deadline to either spend cash accrued under its capital management policy or return any unused M&A budget to shareholders.

Allianz had on Thursday said it would be adjusting that policy by axing a three-year cycle that had pressured management to seal a deal by Friday. Allianz has been outspoken about its interest in larger deals. Chief executive Oliver Baete in November said the insurer would be willing to pay a large premium for a deal able to close a gap in Allianz’s global footprint.

The company on Thursday posted a forecast-beating 23 per cent rise in fourth-quarter net profit. For the full year, a 9.3 per cent rise in health and life insurance profits counteracted a 4.2 per cent fall in operating profit in the insurer’s main property-casualty business.

Hopes to manage a turnaround at US asset manager Pimco in 2016 also began to take hold in the last half of the year, as the US asset manager – which has experienced several years of cash withdrawals in a number of main funds – saw further net inflows in the fourth quarter. Mr Wemmer said inflows in January were close to fourth-quarter inflows of €5.9 billion.

Net income rose to €1.74 billion in the fourth quarter from €1.42 billion a year ago, the insurer said, ahead of average analyst expectations of €1.62 billion. – Reuters / Bloomberg