AIB and Bank of Ireland to undergo ECB stress tests

Irish banks among 37 institutions to be scrutinised 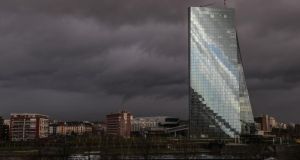 AIB and Bank of Ireland Group will be among 37 banks in the euro zone to undergo stress testing by the European Central Bank, the bank announced on Wednesday.

The examinations will be part of the bank’s 2018 stress-testing programme with the European Banking Authority and will cover banks which are supervised by the ECB and which represent some 70 per cent of euro-area banking assets. Individual bank results are expected to be published by November.

The tests will provide information on banks’ resilience, notably their ability to absorb shocks and meet capital requirements under adverse macroeconomic conditions.

In addition, four Greek banks supervised by the ECB will face an accelerated testing to complete them before the end of the third European Stability Mechanism stability support programme for Greece at the end of May.

1 Will brother’s widow get half of our parents’ estate when they die?
2 Banks face ‘hectic’ loan restructuring as payment breaks end, Goodbody warns
3 Should I switch bank now with Ulster Bank at risk of closing?
4 Save yourself money and heartache by reviewing your house insurance
5 Finance Ireland refinances mortgages with low level of payment breaks
6 ‘I have three children and a dog, so I feel like a bit of a human ATM’
7 Belfast mailbox address used by account holder in Russian money-laundering scheme
8 EU said to be leaning towards appealing Apple tax decision
9 Household wealth grew by €76,000 in years following financial crash
10 Isme to support legal action against pension tax relief limit
Real news has value SUBSCRIBE