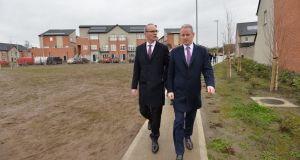 Europe’s long-term lending institution, the European Investment Bank (EIB), provided more than €1 billion worth of financing to Irish operations in 2017, a pipeline it anticipates could be matched this year.

The organisation funded a raft of projects in 2017, including support for the National Children’s Hospital, a redevelopment of the Port of Cork, and a long-term loan to National University of Ireland Galway. The National Children’s hospital was the biggest beneficiary of EIB funding, after gaining backing of €490 million.

Last week, the EIB agreed a €30 million loan to support research and development by a Galway-based medical technology company, Aerogan.

Owned by European Union member states, the EIB last year provided total funding of €79.2 billion in financing for projects both in Europe and around the world.

Its vice-president, Andrew McDowell, told The Irish Times the bank is now looking to go further in Ireland by providing funding to small to medium enterprises and agri-businesses to help mitigate against Brexit risks. Even with Brexit risks, Mr McDowell noted that Ireland is a “very attractive location for EIB financing”.

“Even in a worst-case scenario, Ireland takes a big hit from Brexit and varying estimates have been that that knocks the Irish growth rate to 50 per cent above the EUaverage so, even in those circumstances, we think it’s manageable,” he said.

The EIB already funds housing projects in a number of locations and Mr McDowell noted the Irish government could “learn a lot about what we see going on in other European countries”.

The Minister for Finance Paschal Donohoe welcomed the €1 billion funding in the Republic last year, saying that it is “supporting transformational investment to improve lives and enhance economic opportunities across the country, including backing investment in sectors most vulnerable to Brexit”.

“The Bank of the European Union is clearly delivering on commitments to enhance public and private sector activity in Ireland and I look forward to discussing how the EIB can further support the government’s capital expenditure programme,” he added.

1 Mortgage breaks will not be extended beyond this week
2 Three Ireland switches on 5G network around the country
3 Former junior minister Michael D’Arcy did not contact ethics watchdog over new job
4 Pilita Clark: The looming legal minefield of working from home
5 State should use Covid-19 impact on building costs to build homes
6 Dublin-based ID-Pal raises €1m in funding as it looks to expand
7 More financial firms setting up or expanding in Ireland despite Covid-19
8 New car prices could rise by up to €10,000 if taxes increase in budget
9 Am I paying too much for my buy to let mortgage?
10 Chris Johns: Boohoo exposed on pay and conditions in digital economy
Real news has value SUBSCRIBE