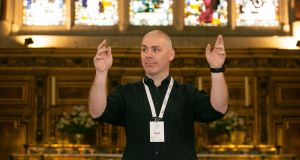 Oxford’s Balliol College chapel is an unlikely setting to observe some of Ireland’s brightest business minds run into difficulty. A choir of eight patiently stood in the chapel’s pews awaiting guidance from their conductors. The conductors were entrepreneurs, keen to test their leadership skills.

David Whelan, the chief executive of VR Education – a company with a €40 million market capitalisation – was the first to step up to control the eight as they sang their way through a piece of music by Johann Sebastian Bach. A rocky start to the conducting, and the resultant music, was a teaching point for Dr Pegram Harrison, an Oxford University entrepreneurship fellow. The lesson: ask the experts.

Subsequent conductors including Peaches Kemp from Itsabagel and Vicki O’Toole of packaging group JJ O’Toole led a more controlled choir, learning from the mistakes of their predecessors, with an audience of about 100 looking on.

The education session – leading without words – followed a day of teaching from leading Oxford academics as part of the EY Entrepreneur of the Year programme. The chief executive retreat run by the financial services firm is a key part of that programme.

This isn’t quite a retreat in the traditional sense but more of an intensive week run with military-like precision and designed to broaden the minds of the attending entrepreneurs. Think boot camp for business.

It brings together alumni from the programme and this year’s EY Entrepreneur of the Year finalists – people from across the spectrum of Ireland’s diverse business world.

They are undoubtedly an impressive bunch. Fresh recruits include those who helped break down sectarian divides in Northern Ireland, pushed to find new ways to treat and cure cancer, and started their businesses with nothing, having come from modest beginnings. The entrepreneurs themselves would be good tutors but this week it was their turn to listen and learn.

Chief executives are often portrayed as being ruthless and, while that may be the case, the co-operation and friendliness evident on this retreat presented a very different side to some of Ireland’s most highly motivated business leaders.

“It’s opened up a great network for us that you can bounce ideas off,” said Tony Judge, the chief executive of Clubs to Hire, who was first on the programme in 2014.

The purpose in this year’s retreat for chief executives was to open the minds of the entrepreneurs to new ideas and to take lessons in leadership both from successful UK business people and sports stars such as former Ryder Cup captain Paul McGinley and former Olympian Ben Hunt-Davis.

And, as intended, it also provided plenty of opportunities for the finalists and the programme’s alumni to bond.

Over drinks and baked Wagyu beef puff canapés on the 32nd floor of London’s Shard building, the jovial bunch joshed with London’s deputy mayor, Rajesh Agrawal, as he explained how the city is the “best in the world”. Bill Wolsey, the managing director of hospitality company the Beannchor Group and a finalist in this year’s EY programme, disagreed, arguing the case for Belfast. The strong Cork contingent on the trip had different ideas altogether. But although they may disagree on which nook of these two islands is the best, all agree that cross-Border co-operation between businesses is important.

In addition, he said, the trip has opened his eyes to co-operation with other companies. He uses a rival product to that of tech company, Teamwork. com, the founders of which are also on the trip, but he has been able to understand their company by virtue of the fact he met the business owners on this retreat.

“Business comes about through relationships. By spending a week with colleagues, you’re getting to know people and that helps build up trust and that helps enormously,” says Jeremy Fitch of Invest Northern Ireland.

Asked about his experience of the programme, which this year carries the theme of ambition, Seán Brett, the founder and chief executive of Steeltech Sheds, said: “It’s given me massive ambition to build the business and scale the business. Before I joined this organisation, I was working away, business was good, money was coming in, but now I want to take it to a much larger scale. My philosophy now is world domination in the steel shed business.”

No doubt all the participants want growth that Brett’s aiming for but this trip confronted the Irish entrepreneurs with issues on the political front. The choice of London and Oxford was undoubtedly a deliberate one by EY to explore the difficulties of Brexit.

“It gives them [the entrepreneurs] a real opportunity to be in the moment, thinking about the impact of Brexit in their businesses and what do they need to do to really think forward on how it’s going to impact their business,” said Frank O’Keeffe, the incoming managing partner of EY in Ireland.

A number of speakers over the course of the week tackled the Brexit issue with Lord Karan Bilimoria, the founder of Cobra Beer, the most cutting in his assessment of the UK’s vote.

“It is an unmitigated disaster,” he told the entrepreneurs in the Tate Modern museum. “The country is divided, I’m sorry to say it’s a horrible situation.”

Rather than be defeatist about the whole thing, however, Bilimoria explained that there are always going to be challenges when setting up in business. When he started his business, he told The Irish Times, he was paying 15 per cent interest on a loan, and rates such as that were the challenge of his time.

Sahar Hashemi, the founder of Coffee Republic, told the entrepreneurs that while Brexit may be troubling, it shouldn’t deter decision making surrounding the setting up of a business.

“As entrepreneurs, you can only focus on what you’ve got. There’s no point sitting there worrying about the future. We’ve got what we’ve got and God knows entrepreneurs are the best people to suck every bit of resource they have,” she said.

Anne Heraty, chief executive of recruitment company CPL Resources, backed up that view. “Businesses have to work together to try and find a solution. In the absence of solutions coming through, we still have to function and create jobs,” she said.

While that may be the case, these business people have other challenges to face, including our ageing population and cyber threats. Oxford’s Prof Sarah Harper explained that the the global population will rise to between 10 and 12 billion people by 2050. While this could present opportunities, there are issues that must be dealt with, including the fact that about a billion people will die from malnutrition while another billion will die from obesity.

Global food distribution, fertility rates in sub-Saharan Africa, education and the way we work will all change quite significantly in the coming years.

Radical longevity could well come about as a result of anti-ageing technologies and therapies and, if that is the case, workers might end up taking sabbatical decades as opposed to sabbatical years.

In the retail space, too, there are challenges. Dermott Rowan, managing director and co-owner of fashion brand Orla Kiely, explained that retail is being hammered by trends in online shopping.

“When you create a cluster of small business and they’re all working and paying tax, that’s a good thing, but when you overtax them they can’t function. The long-term effect is you end up with a whole lot of charity shops or betting shops and that’s not going to work very well for society.

“I don’t think it’s retail high street versus the internet, I think what we’ve got to do is help the high street but it’s got to reinvent itself and become more meaningful,” he said. “Retail’s changing and you’ve got to adapt with it. I think it’s changing here [in London] faster than, for example, Ireland which is doing relatively well, so I think possibly the retail shock will hit Ireland in a different way.”

Aside from business leaders’ wise words of experience, some aspects of the trip pointed to business pitfalls to be avoided. As the entrepreneurs trundled down the Thames one evening, they passed a stark reminder that with ambition there needs to be realism. A slew of cranes at Battersea power station, now a hive of construction activity, were evident as the riverboat turned. The ambitions of many previous developers, including Ireland’s Johnny Ronan and Richard Barrett for the landmark site, have foundered. In a week where entrepreneurs were being encouraged to be bold in their decisions, Battersea stands testament to the need also to be mindful of past failures.

Kevin McLoughlin, EY partner lead for the Entrepreneur of the Year programme, noted that this trip offered an opportunity to reflect on those past difficulties.

“[The finalists] love to hear how other entrepreneurs have done. They love to have the sharing of successes but also failures and I’d say, on balance, they talk more about the mistakes that they’ve made, which is a great thing because it really prompts an atmosphere of real openness throughout the group and they learn huge amounts from each other,” he said.

For Áine Lecky and Éibhlin Murphy, sisters behind engineering group Major Equipment International Limited, the retreat gives a chance to reflect on their business from afar.

“It’s about just stepping back from the business,” Áine says. “I get so caught up in the day-to-day. You then forget about actually taking time out to network and meet people.”

The networking and learning are clearly important parts of the trip for the entrepreneurs but for veteran Liam Griffin, owner of the Griffin Hotel Group, the programme offers a base from which he and his fellow entrepreneurs can open dialogue with government to advance entrepreneurship in Ireland.

“We need to give back as well,” Griffin says, “and we can give back to each other by doing business but we can also give back by saying: ‘What will make business better for entrepreneurs, what will make it more attractive for the next generation?’

“If there’s one thing the recession should have taught us, it is that we need leadership, we need direction, we need example and we need to be practical and grow Ireland.”