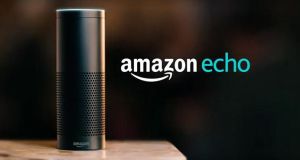 Amazon confirmed the claim that the Echo device had recorded a conversation and sent it to another person, describing it as the result of an “unlikely” chain of events.

Amazon is reviewing how its voice-activated speakers work after a woman claimed her Echo device recorded a private conversation in her home and sent it to a contact without her knowledge.

The incident, first reported by a television station in Seattle, set off a fresh round of concerns about the security and privacy risks raised by the widening adoption of internet-connected devices throughout people’s lives, including their homes.

“I felt invaded,” the woman, identified only by her first name, Danielle, told the station. “A total privacy invasion. Immediately I said: ‘I’m never plugging that device in again, because I can’t trust it.’”

Amazon confirmed the woman’s claim that the speaker had recorded the conversation and sent it to another person, describing it as the result of an “unlikely” chain of events.

“As unlikely as this string of events is, we are evaluating options to make this case even less likely,” it added.

The Portland couple only learned that they had been recorded only when they received a phone call from the husband’s employee, who said he had received audio files of their conversation.

“The person on the other line said: ‘Unplug your Alexa devices right now,’” Danielle told the station. “‘You’re being hacked.’”

Amazon and rivals Apple, Google and Sonos have been pushing to integrate voice technology into all kinds of devices in the home, from speakers to cameras, thermostats and doorbells. The Seattle company recently unveiled a partnership with homebuilder Lennar to showcase its technology in model homes, dubbed “Amazon Experience Centers”.

But the implications of devices that are constantly listening to – and often recording – the conversations around them are just beginning to be realised.

Amazon and Google say their speakers are designed to record audio only when activated with a trigger word, such as “Alexa” or “Hey Google”. The companies also allow users to access and delete audio recordings that are stored on their servers. Last year, however, a glitch was discovered in some Google Home Mini speakers that allowed the devices to constantly record, even if they had not been activated.

Amazon came under fire earlier this week on another privacy matter, when civil liberties groups urged the company to stop selling facial recognition technology to US police. – Copyright The Financial Times Limited 2018