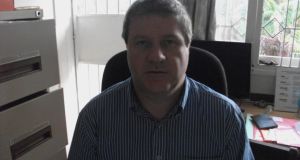 Wherever Waterford man Paul O’Donoghue has moved to in southern Africa, seismic events have never been far behind.

The Mozambique-based entrepreneur’s first encounter with Africa came through his desire to work overseas; a youthful yearning that led him to South Africa in 1988 to work as a volunteer in a rural community.

From a village in Lebowa, a homeland for black people created by the apartheid regime to separate ethnic groups, he was able to observe the demise of the racist system of governance and Nelson Mandela’s historic first steps as a free man.

After moving back to the northern hemisphere in the early 1990s for few years, he relocated to Lesotho in 1996 – just in time to witness the 1998 military invasion of the tiny mountainous kingdom by a Southern African Development Community force.

Then, soon after moving to Mozambique in 2000, that impoverished country experienced one of the worst floods in living memory. Images of the widespread devastation were beamed around the world.

“After South Africa, I went to Lesotho and Mozambique as a development programme officer for the Department of Foreign Affairs, so I managed to experience these extraordinary events quite closely.

“In hindsight, the episode in Lesotho was very scary, as we were right in the middle of it trying to help Irish nationals in the country. In Mozambique, the response to the floods required a huge effort, which meant everyone was involved,” he says.

After three years in Mozambique, it was time either to move to a new posting, or return to Ireland. But Mozambique had got under his skin so, after discussing options with his wife Marla, the pair stayed.

“We really liked Mozambique so decided to take a chance. My wife had a proper job in development, which enabled me to try various things in the private sector. I started out by putting fingers in as many pies as I could and hoped that something would work,” says O’Donoghue, who lives in Maputo, the capital.

The 48-year-old dabbled in tourism and property development, both growth sectors in Mozambique because of the country’s tropical climate and unspoilt beaches.

But, he says, these businesses were hampered by bureaucracy and the onset of the economic downturn in 2008.

“I was a little ahead of the curve in property development and entered the area at a time when there was not a lot of competition, but demand was also relatively weak.

“At that time bureaucracy was difficult to deal with, but it has improved significantly in recent years.

“There is a strong demand in the property sector at the moment, but there is also a lot more competition, especially from Mozambique, China, South Africa and Portugal, ” he says.

But trying different sectors out to see what works is not an approach he would recommend others to take, especially if they don’t have a good grasp of Portuguese, which is widely spoken in the country.

“I’d advise Irish people to come over and have a look first to see what’s going on. I’ve seen a couple of Irish people come here and get involved with the wrong people, and end up being taken advantage of.

“There are many good Mozambicans to do business with, but there are also people on the lookout for fresh meat, so one needs to be careful.

“With that in mind, Irish people should register with the Irish Embassy when they arrive in the country.

“There is also an Irish business forum in the region called Business Ireland, and I would advise people to get in touch with these guys first. Their members have been here a long time and can point you in the right direction when it comes to opportunities you want to explore,” he says.

However, he stresses there is a growing demand for professionals in mining and engineering, as the country has discovered huge oil, gas and coal reserves in recent years.

O’Donoghue has also branched into mining and sustainable forestry, because of their potential.

“I’ve a couple of mining concessions that are being finalised at the moment and I’m also on the board of the British Forestry Company, which plants new forests.

“Lots of Irish entrepreneurs go to South Africa but go no further than that. While there are many opportunities there, there are also lots in Mozambique. There are no racial issues here to talk of, and there is a growing interest in trade over aid, so it is going to be a fertile ground for business in the future,” he says.

1 Corona beer firm reeling after 8% slide due to coronavirus
2 Why Irish banks are now looking beyond vulture funds on problem loans
3 Pharma giant AbbVie warned Government against ‘unfair’ €572m tax bill
4 ‘The only time apartments were viable was in . . . Ballsbridge, Killiney and Dalkey’
5 We have little chance of building enough homes to meet election promises
6 Life as a Facebook moderator: ‘People are awful. This is what my job has taught me’
7 How well paid do you think you are? Here’s how to work it out
8 Coronavirus: Asian markets plunge after Wall St rout
9 Aer Lingus profits down 11.3% to €276m last year
10 Blame for NZ budget leak down to failings at unit led by Makhlouf, report says
Real news has value SUBSCRIBE