Top Irish companies singled out for not reporting emissions 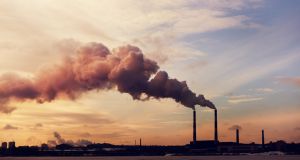 Not-for-profit group CDP assessed the environmental impact of more than 7,000 companies around the world in 2018. Photograph: iStock

Several leading Irish companies have been named and shamed for not reporting their greenhouse gas emissions.

A number of housebuilders and landlords also made the list, including Cairn Homes, Glenveagh Properties and Ires Reit.

In total, 23 publicly listed companies in the Republic were awarded an “F” grade for choosing not to disclose the environmental impact of their actions to CDP – formerly the Carbon Disclosure Project – which works with 827 institutional investors with assets of $100 trillion (€89 trillion) under management.

Although a significant number of companies did not disclose their position, some 28 companies headquartered in the Republic did participate, although that was down slightly on last year.

The top 10 performers included AIB, Kingspan, CRH and Kerry Group. Clayton and Maldron owner Dalata Hotel Group responded for the first time this year and achieved a “C” score. AIB received an “A” score, meanwhile, having procured 100 per cent renewable energy in the year. The company said it aims to be a “leader in sustainability”.

London-based CDP assessed more than 7,000 companies worldwide in 2018 across a range of environmental standards. And while this year was one of progress for companies in the Republic, given that the Climate Change Advisory Council warned that the State is off-course in achieving the 2020 and 2030 emissions reductions targets, work remains to be done, according to CPD Ireland Network chairwoman Caroline Pope.

“We want to see a thriving economy that works for people and the planet in the long term, and this requires companies and investors to build a truly sustainable economy by measuring and understanding their environmental impact,” she said.

Other companies with operations in the Republic that made the list include Accenture in top position, Mainstream Renewable Power in fourth, Shire in fifth and Ingersoll-Rand in ninth place.

The survey found there was a 56 per cent increase in the number of companies who scored a “B” grade or higher.