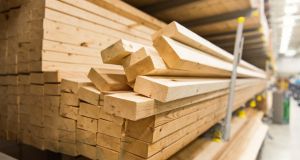 Lobby group Forest Industries Ireland (FII) says there is “zero evidence” that the Department of Agriculture will clear a backlog of tree-felling licence appeals that is starving the Republic of timber.

Politicians last month passed new laws streamlining the forestry licence appeals system in a bid to end the logjam, which has left sawmills running out of logs, endangering an industry that employs 12,000 people.

FII said on Wednesday that there was “zero evidence” that the Department of Agriculture would clear the backlog by January, as it had suggested after Oireachtas amended the Forestry Act, 2014 last month.

The group demanded that the department deal with at least 30 outstanding appeals a week by implementing the new laws, which allow it to split the Forestry Appeals Committee into subdivisions, so it can take on more work.

“The department’s output is a fraction of its own project plan,” FII said. “The current approach and performance can only be described as dysfunctional and leaves the industry hanging on by a thread.”

1 Chris Johns: Economies may enjoy ‘roaring twenties’ if ministers learn lessons
2 Wet pub openings fuelled rise in Irish Covid infection rates – report
3 Basic income for all: Has the Covid crisis given us a new economic model?
4 Profits jump threefold at LinkedIn’s Irish unit to $294.2m
5 ‘I don’t need to do any of this. . .I don’t actually need to work.’
6 Only way is up for Stripe as valuation skyrockets
7 Online shoppers face unwelcome tax surprise
8 Irish designer of Oxford vaccine: ‘I’ve never worked so hard in my life’
9 ‘Make plans but don’t hold on to them too seriously’
10 Admission of mistake in Oxford vaccine dose raises doubts over reliability
Real news has value SUBSCRIBE