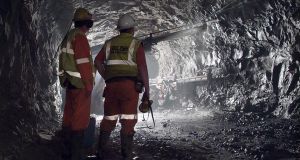 Tara Mines is Europe’s largest zinc mine. The facility employs 580 people and extracts about 2.6 million tonnes of ore annually

Workers at Tara Mines have been told that the mine will resume production on Thursday morning after its Swedish owner, Boliden, determined that its operation is an essential service.

While most workplaces outside those involved in the delivery of frontline emergency services, food and medicines have closed in response to the Government’s imposition last Saturday of new public health guidelines, Boliden told its employees on Tuesday it had decided to reopen Tara Mines on the grounds that the zinc and lead it extracts from the site are used for healthcare products and other applications.

Located at Knockumber, outside Navan in Co Meath, Tara is the largest zinc mine in Europe. The facility employs 580 people directly and mines about 2.6 million tonnes of ore every year.

While news of the mine’s reopening is understood to have received a guarded welcome from some of Boliden’s employees, The Irish Times has been contacted by a number of miners concerned by the potential threat they believe a return to work at Tara Mines during the Covid-19 crisis will pose to both their health and that of their families.

Contacted for comment on Boliden’s decision to reopen the site, Tara Mines’ general manager Gunnar Nyström said: “Boliden Tara Mines is a part of the important international chain for zinc and lead, which is used in both healthcare and other applications. Both we and our union partners believe it is essential for society to try to resume operations.

“Over the last few weeks we have implemented a number of significant precautionary measures to help ensure we stay infection-free. A Covid team, set up to look at areas for improvement on site, have implemented many changes including signage, sanitisers, washing facilities, cleaning products, staggered start and finish times etc. As part of the efforts to try reopening, we will be carrying out a further review of the site to ensure that we are following all public health guidelines and that any further measures we need to take are in place.”

When asked if Boliden had sought and secured approval from any of the relevant Government departments or authorities before making the decision to resume production at Tara Mines, a spokesman for the company said: “The Irish government doesn’t make any approvals. Instead it is up to every business to evaluate if the guideline given is applicable to them. In that evaluation we have found that the mine is essential due to the fact that we are a part of international value chains for raw material needed in a variety of industries. Of course this evaluation was made together with union representatives.”