Glencore to shake up its top tier with younger leaders 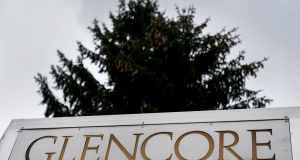 Only a handful of executives from the time of Glencore’s 2011 flotation are still at the company.

Glencore boss Ivan Glasenberg has said several more leadership changes are on the way as the miner and commodities trader makes the transition towards a new, younger generation of leaders in 2020.

Speaking after the publication of annual results, which beat market expectations, Mr Glasenberg said the company was working on bringing through a fourth generation of leaders.

“There will be a few senior changes coming,” Mr Glasenberg said, without giving further details. “As I have said, once the new generation is in place and ready to move on, it will also be time for me to move on.”

In the almost half century that Glencore has traded commodities, the company has had just three chief executives, including its founder Marc Rich.

Today, only a handful of executives from the time of Glencore’s 2011 flotation are still at the company. These include Mr Glasenberg, head of coal trading Tor Peterson, and Daniel Mate, who leads its zinc business.

Bribery investigations by the UK’s Serious Fraud Office and the US Department of Justice have increased the pressure for more change at the top of the company, according to analysts and investors.

Mr Nagle, a fast-talking South African, is the most similar to Mr Glasenberg - who once said his ideal replacement would be about 45 and look much like himself.

Mr Glasenberg was speaking after Glencore announced a drop in annual profits. 2019 was a tough year for the company as it missed production guidance for its key commodities and faced a string of issues at its Africa copper business, which it is now starting to tackle.

In addition, commodity prices fell because of uncertainty created by the US-China trade war. All that weighed on its share price, which dropped more than 20 per cent, underperforming the wider market and its peers.

Glencore said adjusted earnings before interest, tax, depreciation and amortisation – the measure most closely followed by analysts – fell 26 per cent to $11.6 billion in the year to December on lower prices for its key commodities including copper, thermal coal and zinc. However, the result was ahead of market forecasts by about $400 million (€369 million).

Revenue was $215 billion, down from $220 billion, while net debt increased to $17.6 billion, from $14.7 billion a year earlier, as Glencore was forced to add leading commitments to its balance sheet under new accounting rules.

“Given we see a credible turnround in Africa. . .we don’t have too much concern over the balance sheet position today despite being slightly over the top end of the company’s desired level,” said Conor Rowley, analyst at Credit Suisse.

After taking a string of impairment charges on assets, including copper mines in the Democratic Republic of Congo and Zambia and Colombian coal businesses, Glencore recorded a loss for the year of just over $400 million.

Glencore said its Colombian coal assets had been hit by an oversupply of liquefied natural gas (LNG) and the knock-on effect of weaker European demand. Its African copper mine Mutanda, which has been mothballed, suffered from low cobalt prices.

The company declared a dividend of 20 cents a share, which will be paid in two equal instalments, but did not announce another share buyback programme. That would be on hold until net debt is around $14 billion to $15 billion, or about one times ebitda, Mr Glasenberg said.

Mr Glasenberg said Glencore was closely monitoring the coronavirus outbreak but it was too early to tell what impact it would have on growth in China and therefore commodities.

Nonetheless, he said Glencore’s muscular trading arm, which is an important source of cash for the company, had enjoyed a good start to the year. “It is a bit too early in mid-February to start predicting exactly where [profits from the trading business] are going to be . . .but the year has started off fairly well,” he said.

In a separate announcement, Glencore projected a 30 per cent reduction in its absolute Scope 3 emissions – which include those produced by its customers–- over the next 15 years.

Mr Glasenberg said he expected the “depletion” of the company’s coal resource base in Colombia, and to a lesser extent, South Africa and Australia, to contribute to this reduction.

“By 2035 we will not have any production in Colombia. [The] Cerrejón and Prodeco [mines] will not be running at that time.”

Although Glencore has a large coal business, it already has lower Scope 3 emissions than many of its rivals such as BHP and Rio Tinto, which supply raw materials to China’s huge steelmaking industry. – Copyright The Financial Times Limited 2020