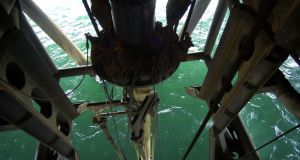 Vermilion Energy has a 20 per cent share in the Corrib gas field. File photograph: Alan Betson

A sharp drop in the price of natural gas contributed to revenues from the Corrib gas field halving last year to an estimated 521.37 million Canadian dollars (€337.43 million).

The slump in sales at the field is confirmed in annual accounts for 2019 for Canadian company Vermilion Energy, which now operates the field off the Co Mayo coast.

Vermilion Energy has a 20 per cent share in the project and the company’s sales from Corrib gas last year declined by 49 per cent to 104.27 million Canadian dollars.

According to Vermilion Energy, the drop in sales was a result of lower gas prices and a natural decline in production of gas at the field.

Last year, the market price for gas fell by half to reach lows not seen in a decade, due mainly to a deluge of gas supplies into Europe.

According to the Vermilion Energy report, production at the Corrib field in the final quarter of last year decreased by 19 per cent compared to 2018 due to a combination of unplanned downtime and natural decline.

The report states that the firm’s unused tax losses from its Irish operations totalled 1.12 billion Canadian dollars at the end of December 2019.

In 2018, Shell Ireland, the former operator of the field, disposed of its shareholding in the project to the Canadian Pension Plan Investment Board (CPPIB) in a strategic partnership with Vermilion.

The deal with Shell Ireland included an initial consideration of €840 million, interest of €47 million and additional payments of up to €250 million between now and 2025, subject to gas price and production.

As a result of Shell Ireland selling off its share in the Corrib Gas field, Vermilion increased its stake to 20 per cent in December 2018, having become the operator of the project at the end of last November.

The Corrib Partners – which also includes Statoil with a 36.5 per cent share – invested more than €3.6 billion in the project before gas started to flow – more than four times the original estimate of €800 million.

1 In this strangest of recessions, what happens next for Ireland?
2 Bank of Ireland sees about 2,000 staff apply for voluntary redundancy
3 Michael O’Leary is the boss you want to lead an airline out of crisis
4 Should I switch bank now with Ulster Bank at risk of closing?
5 Best Covid-19 ‘influencers’ will avoid hectoring
6 Estée Lauder staff at Dublin airport plan further strike action
7 Overhaul of lease arbitration regime would be a game changer for retailers
8 Minister seeks AG’s advice on banker accountability laws
9 Will Facebook walk away from European market after data protection 'hissy fit'?
10 EY Entrepreneur of the Year: nominee profiles
Real news has value SUBSCRIBE