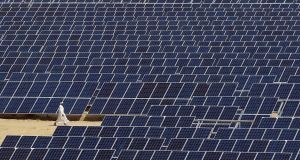 A High Court challenge has been brought over An Bord Pleanála’s refusal of permission for a solar power generating facility in Co Wexford.

Highfield Solar Limited is suing over the board’s decision last month refusing permission for construction of a photovoltaic energy development on a 90-hectare site near Killinick.

If constructed, the solar panels would be assembled in rows over the property.

The site is currently used for grazing cattle.

The case is against the board while Wexford County Council, which in August 2016 refused permission for the development, is a notice party.

The company, with a registered address at Old Castle View, Kilgobbin Road, Dublin 18, claims the board abdicated its responsibility by refusing permission on the basis it would be premature to develop the solar farm before any national or regional strategy on such developments had been adopted.

There is no provision in the planning laws allowing the board to refuse or defer consideration of a planning application for a solar farm development because there is no national strategy in place, the company claims.

Irrelevant considerations were also taken into account, it contends.

The board’s decision is inconsistent as it has granted permission for other solar developments in other parts of the State including Longford and at another location in Wexford, it further claims.

Permission to bring the action was granted on an ex parte basis (where one side only is represented) on Monday by Mr Justice Seamus Noonan who returned the case to May.

1 Getting out from under ‘never-ending’ Celtic Tiger debt burden
2 Fair Deal nursing homecare leaves little for bills and gifts
3 Tax and spend: What have FG done for your pocket?
4 Portugal set to curb tax breaks for wealthy foreigners
5 Pensions row fix could threaten future of State payment, actuaries warn
6 US budget deficit forecast to blow out by mid-century
7 Accumulated profits at Kathryn Thomas’s media company rise to €420,000
8 Pound dips as Bank of England decision looms
9 Will the next decade be a better one for value investors?
10 Court asked to impose maximum disqualification on director
Real news has value SUBSCRIBE