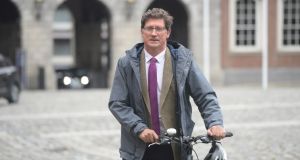 Minister for Climate Action Eamon Ryan said the scheme would help lower electricity prices by up to 30 per cent in coming years. Photograph: Dara Mac Dónaill / The Irish Times

Seven communities around Ireland are about to go into power generation following a historic decision to support their projects under the State’s new renewable energy support scheme (RESS).

The announcement on Friday of successful auction bids also means solar power projects at scale will be rolled out in Ireland for the first time.

A total of 82 new renewable energy projects are set to go ahead after the Government approved auction results – where projects bid to supply power to the grid at the most competitive prices.

One of the community projects will be based in Claremorris, Co Mayo, where a solar farm will be built on an old landfill site, which will generate enough power to supply the town.

Minister for Communications, Climate Action and Environment Eamon Ryan, who announced the RESS-1 results, predicted the scheme would help lower electricity prices by up to 30 per cent in coming years.

“Renewable electricity is a central element of our action on climate disruption, ensuring that we are on a pathway to meet our ambitious climate targets,” he added.

“The RESS scheme not only clearly sets us on that pathway, but lays the foundations of a thriving and cost-effective renewable electricity market that supports the growth of the green economy, creates sustainable work opportunities, and ultimately benefits the consumer,” the Minister said.

The scheme supports a €1.4 billion investment and generates some 1,000 jobs almost immediately, while RESS-1 provides a platform for rapid deployment of onshore wind and solar projects at scale and at least cost, replacing fossil fuels on the energy grid, Mr Ryan said – offshore wind projects will be supported in subsequent auctions.

Mr Ryan welcomed the community element. “Seven communities are being supported to produce their own power and share in the ownership of Ireland’s energy revolution, while inspiring others to follow.”

Five solar energy and two onshore wind community projects were successful in RESS-1. These are located in counties Kilkenny; Galway, Mayo, Wexford, Clare and Cork. The projects will be owned in the majority by communities and revenues from their operation will be recycled back into those communities.

Chairman of the Claremorris and Western District Energy Coop JP Prendergast said: “We are so proud to be putting a solar farm, which is 100 per cent community-owned, on to what was once a dumping ground – turning it from a brown site to green...The big win for us here has given us credibility and empowered us. We can now show other communities just what is possible.”

“We will be selling our power through Community Power, Ireland’s first community-owned energy supplier, who have supported us every step of the way,” he added.

The cost of technologies deployed in RESS are already getting closer to the wholesale electricity price, and will frequently be lower than the wholesale price at a point in time. The approved average price is €74 per megawatt hour, which is considerably cheaper than previous schemes.

It will generate 2,200 gigawatt hour of renewable electricity and a potential saving of 671 kilotons of CO2 per year. Approximately 160 new wind turbines and 1,750 hectares of solar panels will be constructed. Generators receive support which typically lasts for 15 years.

Friends of the Earth deputy director Kate Ruddock said the community element was a “monumental moment”, with 20-30 more community projects already lining up for RESS-2 if they can clear grid connection and planning hurdles.

“This scheme marks a turning point for the people’s ownership of renewable energy in Ireland. It is the first time community-led projects have been given priority access to the energy market and also sets a welcome precedent for communities across Europe, ” she added – as European Commission approval was required to ensure the scheme was compliant with strict state aid rules.

The auction includes mandatory community benefit funds for all projects which will deliver some €4.5 million a year to sustainable community initiatives targeted at those communities living in close proximity to approved projects.

Shannon Energy and Obton, a Danish-Irish joint venture, had 11 solar energy projects approved. With a €100 million investment, it will deliver 120 megawatts of solar power – enough to supply 20,000 households. They will be located in Cork; Galway, Longford, Meath, Offaly, Tipperary, Waterford and Wexford.

Details of the approved projects can be found here.