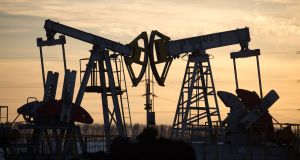 As part of the oil price war, Saudi Aramco has been told to increase its maximum production capacity to 13 million barrels a day. Photograph: Bloomberg

Saudi Aramco will cut capital spending as it prepares for a prolonged period of lower crude prices after its largest shareholder launched an oil price war.

Saudi Arabia’s decision to flood the market with additional supplies after Russia declined to participate in co-ordinated output cuts will have an outsized effect on the kingdom’s energy company.

Saudi Aramco, which has seen its shares fall 11 per cent below its float price, said on Sunday that it would cut spending by as much as 23 per cent in response to falling oil prices.

Yet, as part of the oil price war, Saudi Aramco has been told to increase its maximum production capacity to 13 million barrels a day, up from the current level of 12 million b/d, which would require billions of dollars to overhaul how the company manages, processes and exports its oil.

It is still unclear how the company will be able to cut spending and raise production capacity from its current output levels and whether the government will allocate additional funds for this expansion.

The spending cut came after Saudi Aramco took a big financial hit in 2019. Net income was down 21 per cent year on year to $88.2 billion (€79.1 billion), it said, after crude prices fell due to supplies from the US and elsewhere outpaced cuts from Opec and its allies. It also suffered from lower chemicals and refining margins.

After one of the largest one-day falls on Monday, Brent crude had dropped to $34 (€31) a barrel by Friday, down from roughly $64 (€57) a barrel when the company listed its shares.

This is Saudi Aramco’s first earnings announcement since its record $29.4 billion (€26.3 billion) offering that valued the company at $1.7 trillion (€1.5 trillion).

In the lead-up to the company’s stock market offering last year, Saudi Aramco tried to present itself to potential investors as no different to any other international energy major. But the latest measures by the kingdom and the impact on Saudi Aramco’s operations and inner workings emphasise the extent to which it is an arm of the state, which owns 98 per cent of the company.

Ahead of last week’s Opec meeting, Saudi Arabia had pushed for a steep cut in production in response to a collapse in demand from the global spread of coronavirus. But its plan was opposed by Russia, its ally in a three-year oil pact.

In turn, the energy ministry instructed Saudi Aramco to slash prices for its crude and issued a directive to the company to supply the market with 12.3 million b/d. That is 2.6 million b/d above recent production levels and implies that oil from storage will be used to flood the market. It was also told to raise its maximum production capacity.

“The recent Covid-19 outbreak and its rapid spread illustrate the importance of agility and adaptability in an ever-changing global landscape,” said Amin Nasser, Saudi Aramco’s chief executive. “We will ensure that we maintain the strength of our operations and our finances.”

While the company might be able to offset some earnings losses amid an oil crash with higher volumes, Saudi Aramco – like its peers in the sector – is likely to suffer a massive financial hit.