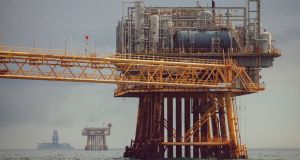 The start of an oil price war at a time when demand is falling due to the coronavirus crisis triggered one of the biggest one-day price falls in history.

Saudi Arabia will boost oil supplies to a record level next month in a sharp escalation of its price war after the collapse of an Opec production deal with Russia that had stabilised the market.

The kingdom aims to supply 12.3 million barrels a day of crude, which is 2.5 million b/d more than it was producing and greater than its maximum sustained output capacity. That suggests Saudi Arabia will take barrels from storage to flood the market as it takes on rivals in a fight for market share.

Olivier Jakob at Petromatrix said Riyadh was pursuing a “shock and awe” strategy to demonstrate it had the capability to raise supply faster than any other producer, swamping markets with oil for which there is only limited demand.

“Saudi Arabia is going all in on trying to disrupt the oil market,” said Mr Jakob. “Over the weekend they signalled a price war and now this has gone straight to a volume war. The market does not need that much crude oil. They are dumping the oil from storage.”

The start of an oil price war at a time when demand is falling owing to the coronavirus crisis triggered one of the biggest one-day price falls in history on Monday, roiling global financial markets as crude fell as much as 30 per cent to nearly $30 a barrel.

While markets stabilised on Tuesday, with Brent crude rebounding to near $37 a barrel, traders and oil producers are bracing themselves for a protracted period of lower oil prices as tensions between Saudi Arabia and Russia – the two largest oil producers outside the US – worsen.

Donald Trump, the US president, held a call with Saudi Arabia’s crown prince Mohammed bin Salman on Monday to discuss “global energy markets”, the White House said. Mr Trump has welcomed lower petrol prices for consumers but some US officials are concerned about the impact on oil producing states, such as Texas.

Occidental Petroleum, one of the largest shale producers, has seen its shares fall more than 40 per cent since Monday.

Russia last week baulked at a Saudi Arabia-led proposal for deeper and more prolonged cuts to stabilise crude prices, in effect trashing its three-year agreement with the kingdom to try to prop up crude markets. Russia has one eye on squeezing the US shale sector.

In response, Saudi Arabia slashed export prices for its crude and said it would raise output but the plan to supply 12.3 million b/d is a faster and more aggressive increase than many oil traders were anticipating.

Saudi Arabia has been aware of Russia’s reluctance to continue cuts for some time, suggesting Riyadh had the nuclear option in its back pocket.

“It was never their first preference. But they were running this parallel track the whole time to keep all of their options open,” said Christyan Malek at JPMorgan. “When Russia declined to co-operate they were forced into using their fallback option.”

Saudi Aramco, the state oil group, has spoken to customers and agreed to supply them with these levels starting from next month, according to one person familiar with the matter.

Just as news of the Saudi supply increase reached traders, Alexander Novak, Russia’s energy minister, responded by saying it, too, could raise production by a further 500,000 b/d in the “near future”.

But Russia does not have the same kind of spare production capacity as Saudi Arabia, which for decades has kept oilfields in reserve that it can tap to raise output in weeks or months.

Russia has been a reluctant participant in joint production cuts believing they only subsidised the US shale industry, which has captured market share from rivals over the past decade. Moscow, which is irate with the Trump administration for sanctions against its energy sector, has spotted an opportunity to target the US economy.

The US department of energy said late on Monday that the price war amounted to “attempts by state actors to manipulate and shock oil markets”, adding that the US as the “world’s largest producer of oil and gas, can and will withstand this volatility”.

The US has suspended planned sales from its Strategic Petroleum Reserve, which it had carried out under budget plans, in a sign the US does not want to add to oversupply in a market at a delicate time for its industry.

The price cut has raised concerns for other members in Opec, who are not as powerful and have limited options to raise additional funds. Iraq said on Tuesday that a price war was not in the best interests of oil producers.

Prince Abdulaziz bin Salman, Saudi Arabia’s oil minister, said last week that any production cut deal would depend on the participation of leading producers, including Russia, which it believes has been shirking its share of existing supply curbs.

Some energy analysts believe that Saudi is trying to lure Russia back to the negotiating table, but the relationship between the two countries has soured.

The so-called Opec+ alliance has helped to stabilise prices since 2016, even as it allowed the US shale industry to thrive. Mr Novak on Tuesday said on Russian television that the “doors are not closed” for more future co-operation with Opec countries on oil policy.

Helima Croft at RBC Capital Markets said: “Opec leadership retains hope that the price collapse will be a catalyst for a reconciliation between the two oil heavyweights. [But] President Putin may not quickly capitulate. We fear that it could be a protracted struggle.” – Copyright The Financial Times Limited 2020