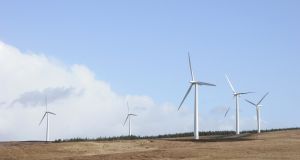 The share of power generated from wind in Ireland is the second-highest in Europe and the highest for onshore wind farms, according to the Irish Wind Energy Association. Photograph: iStock

Wind supplied almost a third of the Republic’s energy needs last year after 24 new wind farms were connected, a report from the sector’s lobby group found.

Energy from wind farms met a record 32.5 per cent of our electricity demand last year, up from 29 per cent in 2018. The share of power generated from wind here is the second-highest in Europe and the highest for onshore wind farms, according to a report from the Irish Wind Energy Association (IWEA).

Last year, 24 wind farms were connected to the national grid, it said, with a capacity of 463 megawatts (mw). Each mw of capacity is capable of powering about 10,000 homes. There is now more than 4,100mw of installed wind energy capacity in the State.

“Our target in the climate action plan is to double our installed onshore wind capacity and we are confident we have the pipeline to enable us to do so,” said David Connolly, chief executive of the IWEA. “We also have enormous offshore wind energy resources, with more than 12 giga watts of offshore projects at some stage of development.”

He called on the Government to ensure that a scheme to provide support to renewable electricity projects concludes on time in June. That is when the first auction under the Renewable Electricity Support Scheme is expected to complete.

Mr Connolly said delays to date “mean we’re already looking at a serious slowdown in construction when we need to be building at a much faster rate”.

He also noted more than a million megawatt hours of electricity, representing 7.7 per cent of total production, was lost last year due to a practice when the grid operator instructs a wind farm to shut off production. He said a stronger transmission system is required to avoid wasting electricity produced by the wind.