Shares now at levels not seen since 1993 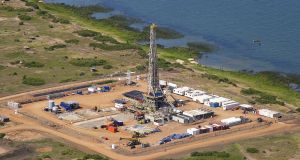 Tullow Oil said in January that had hedged the equivalent of 45,000 bpd at a minimum $57.28 per barrel at the end of last year, which will underpin its cash flow forecasts.

Tullow Oil’s bonds due to mature in 2025 fell to 55 cents on the dollar and its shares plunged to levels not seen since 1993 as investors fretted about the exploration group’s $2.8 billion (€2.45 billion) of net debt in light of a slump in oil prices.

Brent oil futures plummeted by as much as 31 per cent to $31.02 (€27.13) a barrel on Monday in London, marking the biggest decline since the Gulf War in 1991, as Saudi Arabia and Russia stood on the verge of triggering a price war by flooding the market with cheap oil after talks on production collapsed last week.

The International Energy Agency also warned that global oil demand will fall this year for the first time since 2009, serving to compound the woes of heavily-indebted oil companies.

“People will have to take a view of how sustainable these oil prices are. If oil prices stay in the $30s, a lot of companies will struggle,” said David Round, an analyst with BMO Capital Markets in London. “But in Tullow’s defence, they do have a good amount of liquidity, have not near-term [debt] amortisations, and are pretty well hedged at much higher oil prices this year.”

The Irish-founded company’s $800 million (€699 million) of 2025 bonds were trading at par – at 100c on the dollar – before the group cut its oil production forecasts over the coming years, suspended its dividend to conserve cash and announced that its chief executive and exploration director had quit. The bonds had closed last Friday at 67c.

Having warned in January that it will book $1.5 billion (€1.3 billion) of impairments and exploration write-offs in its 2019 results to partly reflect a $10 (€8.74)-per barrel reduction in the group’s long-term oil price assumption to $65 (€56), further charges may be in store if oil prices remain depressed.

“I’d be concerned if in six months’ time we’re still down here,” Mr Round said.

Shares in Tullow Oil fell as much as 57 per cent in London on Monday to 10p, bringing its decline over the course of 12 months to about 90 per cent.