Oil headed for the first weekly gain since July 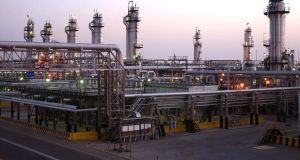 Oil headed for the first weekly gain since July as Gulf Coast refiners ramp up crude processing after disruptions from Hurricane Harvey.

Futures were little changed in New York, up 3.4 per cent for the week. About 8 per cent of US refining capacity remains shut after Harvey first made landfall two weeks ago, according to data compiled by Bloomberg. Almost a quarter of the nation’s capacity was halted following the storm. American crude stockpiles rose by 4.58 million barrels last week, the first gain since June.

While refineries, pipelines and offshore platforms resume operations after Harvey, another Atlantic hurricane, known as Irma, is approaching the US coast and is set to hit Florida on Sunday. Imports into the Gulf Coast region last week fell to the lowest in records going back to 1990, and nationwide crude output fell below 9 million barrels a day for the first time since February.

“When refineries gave signals that damage was not too great and restarts were on the table, then crude rose back up and then continued higher,” said Bjarne Schieldrop, chief commodities analyst at SEB AB in Oslo.

Gulf Coast imports dropped by 41 per cent last week to 1.48 million barrels a day, the lowest volume since at least January 1990, according to a report from the Energy Information Administration on Thursday. Nationwide crude output slid by 749,000 barrels a day to 8.78 million a day.

“While the fear last week was for reduced oil processing by refineries due to hurricane Harvey, the coin has now flipped,” said Schieldrop. “Now the concern is that this may be a heavy hurricane season with the risk of substantial disruptions to crude oil production in the Gulf of Mexico. ”