Switch to Biogas could save Ireland from massive fines 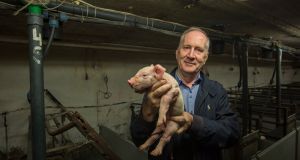 Billy Costello of Green Generation, Nurney, Co Kildare. “A RHI “will make it possible for farmers to become ‘energy farmers’, to put crops into a biogas plant”. Photograph: Brenda Fitzsimons

Some of Ireland’s leading food and drink companies are supporting a big move into production of biogas, an emissions-free energy source from agricultural waste and energy crops.

Diageo, one of the State’s biggest gas consumers – mainly through St James’s Gate brewery in Dublin – and Dairygold co-op are leading the way.

Ireland, with its large agriculture sector, is considered the EU member state with best potential to exploit biogas. But a “renewable heat incentive” (RHI) to support this sector is absent. It’s urgently required, according to those prepared to back the green technology – Ireland is the only EU country without a RHI.

Biogas comes with benefits: it’s a renewable energy source that farmers can help generate and it reduces CO2 emissions associated with farming, which are responsible for a third of Irish greenhouse gas (GHG) emissions.

Much of Diageo’s gas needs next year are likely to be supplied by Green Generation in Nurney, Co Kildare, an anaerobic digester (AD) plant set up by pig farmer Billy Costello. The €5 million biogas facility is beside one of his pig farms. It is designated a demonstration facility by Gas Networks Ireland, the State-owned Ervia subsidiary supporting development of renewable energy.

The Costello family also operates a 3,000-sow unit and dairy farm in Germany, where they have two digesters. The Nurney AD uses piggery slurry and 23,000 tonnes of foodwaste a year, generating enough electricity to power 500 houses.

The facility generates heat and electricity for the piggery from a combined heat and power (CHP) unit. Their aim is to purify and certify the methane, pipe it into the national network for large industry to utilise such as Diageo. A national gas grid injection point at Cush, 8 km away, is due to be commissioned soon.

Germany has 8,000 biogas plants built up over 20 years; the UK has 600. A reasonable start, Costello says, would be to build quickly to match the UK.

Currently, about 14 cents/kilowatt hour is paid for electricity from this energy source; the equivalent in Germany is 22 cents – A 7.5 cent/kilowatt hour subsidy is needed, GNI estimates.

Costello, who is from north Co Galway, cites the case of west of Ireland beef farmers.

“Thousands of them are not making money. They don’t want to change their farm over to bushes or forestry. It goes against the Irish psyche.”

By allowing grass silage to be sold for biogas production, “they remain farmers, the land is green, and the infrastructure is largely in place already. Farmers are helping to decarbonise...and in the process have a new income stream.”

Biogas enhances energy independence by replacing imported fossil fuels and is cheaper. In contrast, “there is not much point to producing beef at a loss, while also adding to GHG emissions,” he says.

Costello believes the Government attitude to energy has favoured monopolies and “old way” thinking – when it came to electricity, it meant “leave it to the ESB” – making acceptance of biogas difficulty to achieve.

Massive fines loom for Ireland after 2020 for failing to meet renewable energy targets in heat and transport, he warns. In much the same way creameries became co-ops, he believes building 15 to 20 ADs a year is realisable.

The preferred system is “Hub and Pod”; pods being small to medium sized farm-scale AD plants in regional clusters; the hub a central injection point connected to the national gas grid.

“This is the most cost-effective solution, and maximises the potential benefit (commercial and environmental) for Irish farmers,” explains Liam Reid Diageo’s corporate relations director.

“Diageo want to be first movers with this proven technology in other European countries. It could unlock a sustainable solution for farm waste management and provide a double benefit in terms of reducing GHG emissions in farming alongside displacing fossil fuels.”

Diageo intends to derive all of its power from renewable sources by 2030 and is seeking a 50 per cent reduction in GHG emissions by 2020 from a 2007 baseline. Already it has achieved a 26 per cent reduction at St James’s Gate. Biogas is set to help close the gap.

The Green Generation model is a template that can be replicated and expanded, says GNI business development manager Ian Kilgallon. Biogas can be upgraded to natural gas quality and injected into the grid or used as vehicle fuel.

Hub projects are also underway in Mitchelstown, Co Cork (beside Dairygold’s dairy processing facility), in Louth/Cavan and another Munster location. Others are at planning stage.

PJ McCarthy, chair of the Renewable Gas Forum of Ireland, an industry body, underlines ease of transition. As most businesses are gas customers and renewable gas can run to the same efficiency in CHP generators and gas boilers, switching is simple. It has the potential to generate 3,000 permanent jobs in rural Ireland by 2050 and 5,000 jobs in the construction phase.

If Ireland does not decarbonise, its reputation as a green producer of food and drink products will unravel, he warns.

A constant focus for Simon Shannon, Diageo supplier performance manager, is on energy efficiency and sustainability. Biogas offers huge opportunity for the agrifood sector, he says, in parallel with helping Diageo to meet its sustainability targets and reduce GHG emissions.

“We would purchase this gas via a certification scheme, whereby we would pay the generator for the quantity of gas that they inject into the national grid, and we would claim the associated GHG emissions benefit resulting from the displaced volume of natural gas. We burn gas on site to generate electricity and steam, which is distributed to all process and facilities users across the St. James’s Gate site.”

Diageo’s sustainability focus cuts across all aspects of the business, including its new €169 million brewhouse. Its CHP plant, the “first of that scale in the world”, adds excess power to the electricity grid. Zero waste goes to landfill. A natural gas vehicle delivers malted barley from its facility in Athy to St James’s Gate, producing 20 per cent less CO2 emissions than its diesel-powered equivalent.

The main source of carbon emissions in Dairygold’s business is natural gas, ie fossil fuels from the national grid, which supplies almost 90 per cent of the energy it uses. It has been at the forefront of energy and emissions management for many years, according to Dave FitzGerald, Dairygold’s group head of sustainability.

“In the 1990s we were the first dairy processor in Ireland to install CHP, a clean and highly carbon-efficient way of generating electricity and steam for our processes from natural gas,” he adds. “Through recent investments in processing capacity we have incorporated energy efficient technologies to reduce our energy demand.”

In 2012 Dairygold installed an AD at its Mitchelstown complex.

“The technology used was a first for the dairy industry and it is the largest above ground digester of its type in the world. The digester generates biogas from dairy processing waste water. The biogas is burned in boilers and supplies up to 6 per cent of the heat demand for the production site. This displaces natural gas use and saves over 3,000 tonnes of greenhouse gas emissions annually.”

They are exploring ways to further reduce its processing carbon footprint through renewable fuels.

“Currently the options for large scale renewable heat in Ireland are limited and do not work with our energy infrastructure. Based on our positive experience with self-generated biogas, we support the inclusion of AD and biomethane (upgraded biogas) grid injection in the proposed RHI.”

FitzGerald adds: This is essential to kick-start the biogas industry in Ireland. The GNI initiative to support biomethane grid injection will provide an option to further reduce our processing carbon emissions.”

Relying on HGV transport for milk collection and haulage of farm inputs, it sees potential in a move to biomethane to further reduce emissions.

“As a co-operative, we are keenly interested in the potential for AD at farm level to reduce farm emissions, provide an alternative income stream for farmers and improve nutrient management.”

Minister for Climate Action and the Environment Denis Naughten is committed to a RHI: “It will create new commercial opportunities for farmers in heat technologies including biomass boiler installations and new opportunities for foresters. It will also help us to meet our EU renewable energy targets.”

The proposal he is bringing to Government will include “anaerobic digestion which will encompass biogas boilers and biomethane injection into the natural gas grid”.

Tiered payments will apply to each technology. Payments will decrease with increasing scheme size and economies of scale.

“This will provide a balance between ensuring suitable incentives for investment and value for money for the Exchequer. It is vital the scheme has sufficient budgetary safeguards. The experience from other jurisdictions provides important lessons for implementation of the RHI in Ireland,” he flagged last week. The package is due to be signed off by Cabinet shortly.

Those in the emerging biogas sector hope it gets its fair share; enough to scale up a proven energy industry – what’s needed, they underline, is a lot less than those threatened EU fines arising from missed renewable energy targets.

What is renewable gas, also known as biogas or green gas?

It’s gas produced from renewable sources. While conventional gas supply is procured by extracting fossil fuels from the earth, it is created by extracting methane from feedstocks such as animal waste (manure/slurry); municipal waste, food waste and energy crops ie grass/silage/grains.

How is it generated?

It is not high-tech. Source material is placed in an oxygen-free container known as an anaerobic digester (AD). A bacteria is introduced and the material breaks down releasing methane gas identical to natural gas obtained from drilling and exploration.

Gas is a cost-effective flexible and low emission energy option – biogas even more so; it is indigenous, sustainable and “carbon neutral”.

Its flexibility for use in a variety of circumstances: it is easily upgraded to natural gas quality and injected into the national grid, or used for transport. It is usually used as fuel for heating or electricity generation. This is achieved using sustainable feedstocks without the need for dedicated energy crops or permanent land use change.

What are the Paris climate change targets to be met?

By 2020, 16 per cent of Irish energy must come from renewable sources, with individual targets for heating, transport, electricity generation and associated greenhouse gas emissions. By 2020, 12 per cent of Ireland’s heat must come from renewable sources. At present, we are well short of this target. Failure will result in heavy EU fines – it is estimated that fines of €240 million per annum for each percentage point targets are missed by.