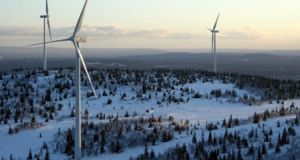 The conference was attended by renewable energy producers from Norway, Sweden, Finland and Denmark

Nordic countries have offered to collaborate with Ireland on the development of a range of technologies to help decarbonise the Irish energy sector. The offer also includes co-operation on ocean and offshore wind projects.

The offer was made at the first “Nordic Green” conference held in Dublin by ambassadors from Nordic countries who are based in Ireland. Such co-operation was possible without being a member of the EU, said the Norwegian ambassador to Ireland Else Berit Eikeland.

Nordic countries were already collaborating through the Nordic Council of Ministers to ensure the region remained at the forefront of the green economy and in achieving growth while reducing carbon emissions, said Anna Gran, coordinator of the Nordic Climate and Air Pollution Group.

Research showed scaling-up of 15 “Nordic solutions” proven to work could cut global CO2 emissions by 4.1 gigatonnes in 2030, she said.

“Nordic countries have pioneered low-carbon solutions – from geothermal energy in Iceland to electric vehicles in Norway. We know it can be done, since it already has. So, let’s start today and not tomorrow.”

If the world adopted the Nordic approach, Ms Eikeland said, by 2030 it would see a reduction in emissions equivalent to that which the EU is producing at the moment. In cost terms that would be equivalent to “nine days of current fossil fuel subsidies” amounting to over $490 billion a year.

The actions needed were, nonetheless, difficult to achieve because significant upfront investment was required and fossil fuel subsidies and low energy prices continue to be available, the conference heard. There was also a lack of awareness of the benefits, and there could be negative impacts from poor implementation.

The conference, hosted by the Nordic embassies in Dublin, heard from renewable and sustainable energy producers in Norway, Sweden, Denmark and Finland.

Citizen engagement was important because recent studies had shown “the consumption decisions of households affect around 70 per cent of greenhouse gas emissions”, he said.

In an update on Irish moves embracing sustainable energy, Jim Gannon, chief executive of the Sustainable Energy Authority of Ireland, said there was now a demand within Irish society and business that Ireland improve itself in adopting sustainable energy sources and in pursuing climate actions.

Per Sanderud, director of the Norwegian Water Resources and Energy Directorate, said clear regulations were essential for the development of energy production in an open and free market. “Renewable energy will become the cheapest way to produce electricity in the future. Investments in new windfarms deserve to be considered publicly. Clear regulation and transparent processes lead to better and less contentious decisions,” he said.

Bo Normark of the Swedish Energy Agency outlined how Sweden, in the past 50 years, had cut CO2 emissions in half, doubled its GDP and kept energy consumption constant. “This strategy will continue with ambitious targets for the heating and transport sectors,” he said.

Martin Forsén of NIBE, the Swedish heating technology company, said Ireland could move away from heavy fossil fuel dependence for heating homes and businesses. “The example of Sweden’s extensive use of heat pumps could offer inspiration for Ireland as it seeks to cut CO2 emissions to meet climate change commitments.”

Widespread deployment of district heating in Irish cities and large towns could also make a major contribution, said Morten Jordt Duedahl of the Danish Board of District Heating. “Modern, well-planned and well-structured district heating will play an important part for any European city with long-term, sustainable goals,” he added.

1 Revenue publishes list of companies tapping State for wage support
2 107 jobs at risk as Broderick’s shareholder considers examinership
3 Trump vs Biden: Stakes are high for the Irish economy
4 Bake-off soy sauce tweet backfires for UK trade ministry
5 NatWest CEO declines to give timeline for Ulster Bank decision
6 Stripe moves payment processing to Dublin due to Brexit
7 Over 60% of mortgage holders miss chance to save €10,000
8 Will remote working become the norm?
9 How long can Government afford to keep State pension age at 66?
10 Corporate America is breaking with Donald Trump
Real news has value SUBSCRIBE