Greencoat to pay dividend as it reports €3.87m pretax loss 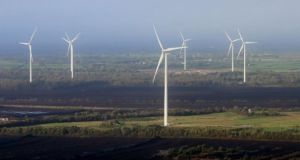 Greencoat said it was pleased with the performance of its investment portfolio.

Irish renewable energy group Greencoat Renewables reported a €3.87 million pretax loss for its maiden set of results covering the seven months from mid-February to the end of September.

The company generated operating cash flow of €8.9 million for a period during which it raised €270 million when it floated in London and Dublin.

Greencoat said net asset value declined to €261.6 million or 96.9 per cent from a listing price of €264.6 million or 98 cent a share, due to a decline in long-term power price forecasts.

It said it would pay a dividend of €2.61 per share in March next year in line with its stated initial target.

The group, which invests in wind farms, said it was pleased with the performance of its investment portfolio which generated 107.7GWh of electricity, 3 per cent above budget.

“Our assets have performed well over these first seven months, generating slightly more power than budgeted, due to a slightly higher than average wind resource,” said Ronan Murphy, non-executive chairman.

“We believe that the macroeconomic environment looks increasingly favourable for renewables in Ireland, and we are optimistic about opportunities in Ireland’s secondary wind market,” he added.

The company is targeting an internal rate of return of 7 to 8 per cent on the issue price of ordinary shares to be achieved over the longer term.

Net asset value at the end of the reporting period totalled €261.6 million or 96.9 cent per share. The group had €70.8 million of debt outstanding, equating to 21 per cent of gross asset value, which is towards the lower end of Greencoat’s target range.

During the reporting period, Greencoat made two acquisitions acquired a 136.7MW seed portfolio from Brookfield consisting of the 100.0MW Knockacummer and the 36.7MW Killhills wind farms.

“The Irish wind market remains a very attractive jurisdiction with both a stable and supportive regulatory regime. Wind remains the dominant renewable technology and the group is in a good position to benefit as electricity production from wind becomes an increasingly important part of Ireland’s generation mix,” added Mr Murphy.

In a note to investors, Davy, which began its coverage of Greencoat recently with an “outperform” recommendation, said the results confirmed the business had made a good start to life as a public company.

1 Lahinch Golf Club runs out of its own cash after €3m Covid-19 hit
2 Fiona Reddan: Who’s afraid of Revolut? Not AIB and BOI it seems
3 Irish start-up which developed facial recognition for cows raising over $50m
4 Son putting elderly dad under pressure to sign over land
5 Clanwilliam Group sees revenue rise to €84m
6 John FitzGerald: What is actually behind Ireland's economic growth?
7 WH Smith Ireland reports weaker profits as turnover rises
8 How much can Ireland borrow to get through this Covid-19 emergency?
9 Ryanair warns of further cuts, Stripe to raise more funds, and AI for cows’ faces
10 Chris Johns: A political dogfight grips London, but what, exactly, are they fighting about?
Real news has value SUBSCRIBE