Air passengers should not have to pay more than €50 for Covid test, report says

People arriving from EU, US and Canada do not have to self-isolate for two weeks if PCR test is negative 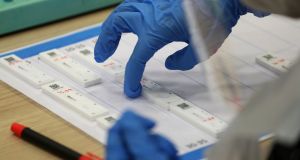 The Government says experts advise that cheaper, faster antigen tests are not suitable for international air travel, so the Republic only accepts the slower more expensive PCR screening

Passengers should not have to pay more than €50 for Covid-19 tests that allow them avoid travel restrictions, politicians say in a report published on Wednesday.

Since last month people arriving here from the EU, US and Canada do not have to self-isolate for two weeks if gene-based PCR test results show they do not have the virus.

A report from the Joint Oireachtas Committee on Transport argues that “passengers should not have to pay more than €50” for these tests, which can cost up to €150, depending on the speed at which results are needed.

The document, Issues Affecting the Aviation Industry, says that the Government should provide subsidies or take other steps to cut the cost of tests and make travel more affordable.

Guidelines introduced in November waive the advise to self-isolate for those arriving from regions classed as orange, or medium risk, by the European Centre for Disease Control if they show a negative result from a PCR test taken up to three days before arriving here.

Those travelling from red or high-risk zones can avoid restrictions if they get a negative result from a PCR test taken up to five days after arriving in the Republic.

The Government says experts advise that cheaper, faster antigen tests are not suitable for international air travel, so the Republic only accepts the slower more expensive PCR screening.

Some EU countries rely on rapid antigen testing. The report, the result of a near two-month inquiry into the impact of Covid-19 on aviation, recommends that pre-departure antigen tests be mandatory for those arriving from red or orange zones to dispense with the need for restrictions.

Separately, the committee wants the Government to re-establish the State airports’ authority to take charge of Cork, Dublin and Shannon, with the three operating as separate companies under its umbrella.

Shannon Airport has been part of State-owned Shannon Group since 2013, while Dublin and Cork are part of another State company DAA.

When they appeared before the committee last month, trade unions Siptu, Fórsa and Connect, which represent airline and airport workers, all called for Shannon to be re-merged with the DAA as its independence had not worked.

A Shannon spokeswoman said the current structure had served the local economy well.

“Since its establishment Shannon Group has made significant progress, growing passenger traffic at Shannon Airport by 23 per cent, with the group’s activities supporting 46,000 jobs, generating an economic impact of €3.6 billion per year and contributing €1.1 billion in Exchequer returns,” she said.

“The industry must be at the fore as the country reopens,” he said.