EirGrid to spend €2bn on network upgrades over next five years 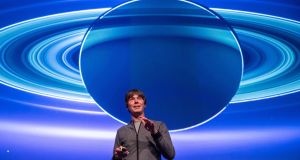 Electricity grid operator EirGrid will spend more than €2 billion over the next five years to prepare the system for 2030, when more than two-thirds of the power it transmits will come from renewable sources,

Government targets demand that renewable sources, such as wind or solar power, generate 70 per cent of all electricity used here by 2030, as part of the State’s efforts to meet commitments to combat climate change.

EirGrid chief executive Mark Foley said yesterday that the State company would spend more than €2 billion on upgrading the national grid, which transmits electricity from generators to where it is distributed to homes and businesses, to prepare for this.

The work will include building new high capacity power lines to the west of Ireland. The EirGrid chief said the company had already begun talks with communities along its route. It will also work on strengthening existing lines.

EirGrid is developing ways to maintain the system’s stability when it is carrying large quantities of renewable electricity, which is less stable than that produced by generators that burn gas and other fuel.

“We have developed very sophisticated engineering solutions that allow the grid to stay stable when we have that much renewables on the system,” he said. “We also have a whole range of people providing software that helps stability.”

Mr Foley explained that the work would also include a line running between the Republic and France that will carry enough electricity to power 700,000 homes.

EirGrid is building the line, which will cost €1 billion, running from Cork to Brittany, in partnership with French grid operator, RTE. The European Union is likely to provide some cash for the project.

Mr Foley added that EirGrid also supported the privately-backed proposed Greenlink line connecting Wexford with Wales, as he said that greater interconnection with the broader European grid was vital.

Speaking after the State company launched a five-year strategy that is focused on preparing to meet the Government’s 2030 targets, Mr Foley said the amount of renewable electricity on the system was about to hit a record 33 per cent.

He predicted that it would reach 40 per cent by the end of next year, allowing the Republic to hit a target agreed with the EU.

In a statement, Mr Foley said EirGrid could now operate the system with 65 per cent of the electricity coming from wind and solar at any one time. “This is a pioneering achievement. By 2030, this must increase to 95 per cent,” he said.

EirGrid will also have to connect new wind farms with a total capacity of 10,000MW to the grid. The current total is 5,000MW.

Mr Foley explained that cutting the electricity system’s greenhouse gas emissions will do the same for transport, if the Republic converts to electric vehicles, and heating.

Addressing the strategy launch, Minister for Communications, Climate Action and Environment Richard Bruton said: “Our electricity grid will be pivotal to the success of urgent climate action in Ireland.”

10 AIB and Irish Life in advanced talks on joint venture