Minister to ask State companies ESB, Eirgrid and Gas Networks Ireland to give their assessment of future energy security 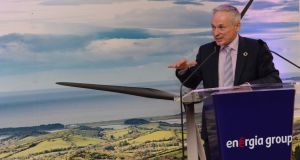 The Minister for Climate Action Richard Bruton announced a review of the Republic’s fossil fuel needs shortly after Taoiseach Leo Varadkar pledged to ban oil exploration in the State.

Mr Varadkar told the UN last week that the Republic planned to phase out oil exploration, beginning with zones in the Atlantic that cover 80 per cent of the State’s territorial waters.

Mr Bruton told opposition TD Bríd Smith two days later that he planned an energy security review that would consider what fossil fuels the Republic would need as it moved to cut greenhouse gas emissions over the next decade.

The Government wants the Republic to generate 70 per cent of its electricity needs from renewable sources such as wind and solar power by 2030.

However, Mr Bruton acknowledged that, after reaching that target, the Republic would still need fossil fuel during periods when “the wind isn’t blowing or the sun isn’t shining”.

A spokeswoman for the Department of Communications, Climate Action and Environment, said that Mr Bruton intended asking State companies ESB, Eirgrid and Gas Networks Ireland to give their assessment of future energy security.

She explained that the Minister was doing this in light of plans to axe coal- and peat-fuelled electricity plants and the need for “back-up conventional generation” to support wind and solar power.

“Once these assessments are received, the Minister will then commission a security of supply review in the context of the transition to a low-carbon economy and the move to 70 per cent renewable electricity,” she said.

Energy industry insiders say gas is the fuel likeliest to provide the 30 per cent of electricity that does not come from renewables after 2030.

Mr Varadkar’s announcement drew fire from industry figures and experts because it would effectively end the search for gas alongside oil. Gas is burned to generate about 60 per cent of the electricity that Irish people use.

The Corrib field off the Mayo coast provides around two thirds of this, but this will run out around 2025, leaving the Republic totally dependent on imported gas.

While Mr Varadkar said the ban would only cover exploring for oil, not gas, experts pointed out that both are always found together, so it is not possible to search for one over the other.