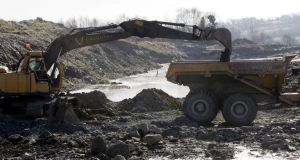 Galantas Gold Corporation, the Canadian group that wants to develop a gold mine in Tyrone, has had to put its Northern Ireland plans “on hold” because it cannot secure the necessary “anti-terrorism cover” from the PSNI for its blasting operations at the Omagh gold mine.

The underground mine had been expected to create 130 jobs but on Monday the group said discussions were under way about potential redundancies with recently-hired mine personnel, and any new recruitment or ongoing investment had been “deferred”.

Galantas had previously confirmed that it was in negotiations with the PSNI to organise further blasting arrangements for its underground mine development which had just started last month.

The PSNI is required to provide anti-terrorist cover for the transportation and use of blasting materials in Northern Ireland.

But in a regulatory notice issued on Monday, Galantas, which is dual listed on Toronto’s TSX Venture Exchange and London’s AIM market, said the PSNI had advised the group that it could provide anti-terrorism cover to Galantas for only a maximum of a two-hour period, two days a week which, the company claimed, would not be enough to sustain development or operation of the Tyrone mine.

Galantas said there was also an issue over a “cost-recovery agreement” with the PSNI that had not been agreed.

In its statement it said it had been advised that other organisations involved in quarrying or underground mining had received anti-terrorism cover without a cost-recovery agreement.

Galantas said in light of this it had tried to discuss the issue at “the highest levels of command in PSNI and the Northern Ireland Office but engagement has so far been declined”.

The Canadian group said it “wholeheartedly supports PSNI and its officers in its laudable objective of maintaining peace, law and order in Northern Ireland in difficult circumstances”.

But it added: “The company believes it is improper of PSNI to act in a discriminatory manner against a lawful business. The company has been given no alternative other than to pursue its legal options, which may include seeking substantial compensation for the costs of delays.”

Galantas Gold Corporation president and chief executive Roland Phelps said the PSNI’s stance was a blow to the proposed mine development and to the livelihoods of its employees.

“The company pays full UK taxes, royalties and mineral licence fees. A cost-benefit analysis of PSNI providing the required anti-terrorism cover required by PSNI is hugely to the state’s benefit – not that this is any reason to allow a potential terrorist threat to interfere with any citizen’s lawful rights or business,” Mr Phelps said.