EU renewables deal is impressive – unless you’re a farmer 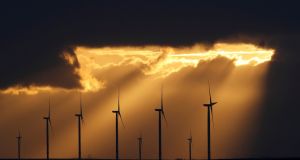 Our ability to deliver onshore wind energy on to the national grid is impressive by any yardstick. Photograph: Christian Hartmann/Reuters

Negotiations this week on a revised Renewable Energy Directive almost assumed the “all-nighter” status of the annual haggling over fish quotas. But the outcome was far from bleary eyes and a poor compromise. The setting of an ambitious, legally binding target of 32 per cent renewables across the EU by 2030 was impressive and surprising.

An alliance of Spain, Portugal and Italy had pushed for an even bolder 35 per cent target in light of fresh evidence that plummeting costs for renewables, such as wind and solar, could benefit the EU economy. Ireland was among those favouring a halfway house option based on the commission’s original 27 per cent proposal.

WindEurope calculated the difference between the 27 per cent and the 35 per cent target would amount to €92 billion of investments in wind alone.

For the Republic, one of a handful of member states set to miss its 2020 targets, the new figure appears fanciful, given lack of progress to date in adopting renewables. This is most obvious in transport and the failure to embrace solar technologies, though our ability to deliver onshore wind energy on to the national grid is impressive by any yardstick.

This week’s deal has been broadly welcomed, but it delivered a harsh blow to farmers. In closing the door on unsustainable use of palm oil in transport, it has undermined sustainable deployment of crop-based biofuels generated within Europe.

With the proper policy framework and freeing-up of bureaucratic blockages to development, the overall target is realisable. What’s more, a 70 per cent target electricity generation from renewables is also possible and cost-effective, though not without leadership and collective understanding of the benefits.

The other missing ingredient is the ability to prompt a major shift in human behaviour among Irish people. Parking the “fines fear factor” would also help, as the returns to the Irish economy and every energy user would be far greater than penalties for missed targets. The latter, nonetheless, is a big stick.

While the EU recently introduced “flexibilities” that will ease the pain of annual fines for failing to reach targets, buying “credits” from energy-compliant countries (based on current trends) would inevitably cost several hundred million euro annually. It may be a convenient escape route but it’s a bill no government would get away with paying on a continuing basis.