‘The Irish Times’ Business Person of the Month: Eddie O’Connor 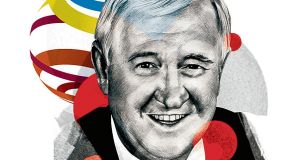 The chairman of green energy group Mainstream Renewable Power, Eddie O’Connor, has been chosen as The Irish Times Business Person of the Month for May, an award run in association with KPMG.

Early last month, Mainstream sold a wind farm development off the Scottish coast to French utility Électricité de France (EDF) for a price reported to be more than €600 million.

According to Mainstream, the project, Neart na Gaoithe – the strength of the wind – will produce 450 mega watts of electricity, enough to power a city the size of Scottish capital Edinburgh, when it is completed.

This, though, would be variable rather than constant electricity. *

The deal itself will pave the way for the opening of a grey market in Mainstream shares later this year, ahead of an expected stock market listing at the end of the decade. It also justified Mainstream’s decision to scrap a plan to raise €125 million last year by selling a stake in the Irish-based business to a US investor.

Mainstream came close to selling Neart na Gaoithe two years ago for €100 million but the deal fell through when the Royal Society for the Protection of Birds brought a legal challenge against all such developments. The British courts ruled against the charity last November.

He then founded Mainstream in 2008. The company now has offices in seven countries across four continents and employs more than 160 staff.

9 Do young people really need to go back into the office?