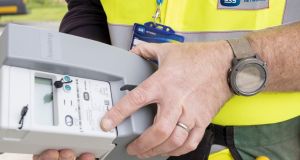 The programme will see 2.4m smart meters being installed across every home, farm and business in the Republic by the end of 2024

The programme will see 2.4 million smart meters being installed across every home, farm and business in the Republic by the end of 2024.

ESB began roll-out of the programme last year in counties Cork, Laois and Kildare. By the end of 2020 it is envisaged that 200,000 meters will have been replaced, with 500,000 more to be done in each of the following four years.

Customers will be able to avail of new smart services from their supplier as of next year.

The EIB, which is the financial arm of the EU, is the world’s largest international public bank. It traditionally backs big infrastructure projects, but in more recent years has also increased lending to the private sector, with beneficiaries including Irish companies Devenish and Nuritas.

EIB is providing a 15-year loan to support the roll-out of the smart-metering programme. It signed the deal for the loan with ESB Networks on Friday.

“Our €150 million financing commitment to ESB Networks will support the extensive roll-out of smart meters to every home and business in the country, giving consumers greater control over their energy consumption and supporting the electrification of heating and transport,” said Andrew McDowell, vice-president of the bank.

Over the last five years the EIB has supported new investment across Europe to provide more than 70 million advanced and digital electricity smart meters. In the Republic it has provided €4.2 billion for energy investment initiatives.

“The EIB looks forward to further increasing our support for climate action with Irish partners in the years ahead.” said Mr McDowell.

1 Aldi to impose limits as Christmas toys go on sale
2 First look: Is the iPhone 12 Pro the best smartphone out there?
3 Irish elearning company LearnUpon closes €47.4 million investment
4 Fair deal? Family at odds with hospital and each other not so sure
5 Ryanair lags rivals as Covid-19 vaccine hopes buoy markets
6 Irish house prices could buck European trend and fall this year, says S&P
7 What to consider if older person or loved one needs care at home
8 Streaming services set for Christmas battle after drama-filled year
9 ‘Tailored’ loan relief better than blanket breaks as Level 5 looms - Central Bank
10 US set to unveil antitrust case against Google
Real news has value SUBSCRIBE