Electric Ireland to cut bills by up to €8.30 a month

Rivals not ruling out similar move 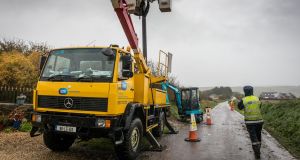 ESB subsidiary Electric Ireland will cut prices by an estimated €1.80-€8.30 a month in a move likely to spark other energy suppliers to follow.

Electric Ireland said on Wednesday that it would cut electricity and natural gas prices for the 1.2 million Irish homes that it supplies from April 1st.

The State-owned energy supplier pledged to reduce electricity prices by 2.5 per cent and natural gas charges by 11.5 per cent.

Electric Ireland estimates that its cuts will save families who buy both electricity and gas from it €100 a year or €8.33 a month on average.

Rivals Airtricity, Bord Gáis Energy and Energia did not rule out cutting their charges after Electric Ireland’s announcement.

Bord Gáis noted it was the only supplier to cut energy prices last October. “We are closely monitoring the global energy market which is constantly fluctuating, and movement in wholesale prices is just one of the factors at play when it comes to the end price of energy for consumers,” the company said.

A spokesman for Airtricity said the energy supplier always kept prices under review.

However, it is thought that the business could respond to Electric Ireland’s reductions with cuts of its own in coming weeks.

Energia argued that it was the cheapest supplier of gas and electricity combined to households.

“We actively monitor wholesale market prices and broader trends on a continuous basis, however we do not comment on potential price changes unless we are making a specific announcement in that regard,” the company said.

Electric Ireland estimates that homes that buy only electricity from the company will save €22 a year or €1.83 a month on average.

Those who buy only natural gas from Electric Ireland will see their bills fall by €78 a year or €6.50 a month, the company calculates.

Wholesale electricity prices have been falling for some time aided by easing natural gas prices on world markets.

Gas is burned to generate about two-thirds of the electricity that Irish people use.

Electric Ireland is the division of State-owned ESB that supplies homes with electricity and natural gas.

Marguerite Sayers, executive director, noted that its reduction in gas prices was the largest since it began supplying this fuel to customers.

1 British exceptionalism backfires in style as Johnson tests positive for coronavirus
2 Wetherspoon’s panto-villain chairman may have the last laugh
3 UK needs to be honest about its Covid-19 strategy
4 Will Covid-19 force Primark to rethink decision not to sell online?
5 Remote working doesn’t suit everyone, and it exposes woolly leadership
6 Usit travel group in liquidation due to coronavirus crisis
7 Volkswagen burning through €2bn in cash per week
8 Retail landlords worried rents will dry up during Covid-19 crisis
9 Mobile, broadband suppliers to be given extra radio spectrum
10 ESB paying exchequer €88m dividend a pointless exercise
Real news has value SUBSCRIBE