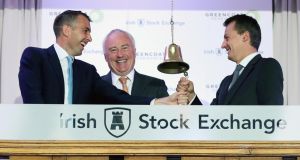 Energy company Greencoat Renewables has announced the acquisition of a wind farm in Co Clare for an initial €35.4 million.

The company informed Euronext Ireland of the deal for Letteragh Wind Farm in a note to investors on Monday.

The purchase of the 14.1MW facility brings Greencoat Renewables’ portfolio of operational wind assets to 476MW.

The wind farm consists of six Enercon E92 turbines that have been operational since December 2019.

The wind farm’s revenues are contracted under the REFIT 2 scheme, providing long-term guaranteed minimum floor price for the electricity generated until 2032. Enercon will continue to manage the operations and maintenance contract.

The acquisition is being funded by the company’s €380 million credit facility. Following the acquisition, Greencoat Renewables total borrowings represent 38 per cent of gross asset value.

An analyst with Davy said that while the deal was small, it would add “another high quality” asset to the company’s portfolio.

“Greencoat continues to execute on the acquisition opportunity across multiple asset types,” he said. “Letteragh is similar to several other small- to mid-sized acquisitions which Greencoat has completed in Ireland in recent years.

“While small (about 3 per cent of expanded installed base), it adds another high-quality, recently commissioned and long-length contracted revenue asset to the portfolio. Ample headroom and an active pipeline suggest further assets will be added in due course.”

The analyst said the price was “slightly above the portfolio average” but consistent with other assets which it has bought of a comparative age and wind resource.

“It has little impact on Greencoat’s available headroom,” he said. “It increases gearing to 38 per cent, with just over €140 million of remaining headroom available.

“We understand that the pipeline remains healthy across its various market opportunities, consistent with what it has previously communicated.

“Should Greencoat move to put the corresponding debt facilities in place, it could invest a theoretical €590 million before reaching its 60 per cent gearing upper limit.”

“We are pleased to announce the acquisition of Letteragh Wind Farm, adding another high-quality wind asset with long-term contracted revenues to our portfolio,” he said.

“We will continue to work with both international and local developers, providing them with an opportunity to recycle capital into new projects, while enabling us to drive long-term value for our shareholders.”