Banning oil exploration could have implications for energy security 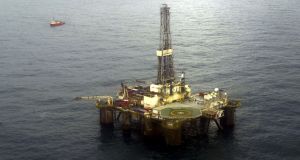 The Corrib Gas field is due to run out in 2025. Photograph: Alan Betson

The Republic this week joined Belize, Costa Rica, France and New Zealand in banning oil exploration. Taoiseach Leo Varadkar told the United Nations that existing licences would continue but we would not issue new ones for the Atlantic area that forms 80 per cent of Irish territorial waters.

This area includes our one productive natural gas field, the Corrib, along with zones where companies are most active in seeking further oil or gas reserves.

Variously interpreted as a political overture to the Greens, now seen as a threat to Fine Gael in Dublin following their strong European and local election performances, or a bid to strengthen the State’s hand in its campaign for a seat on the UN Security Council, Varadkar’s move took many by surprise.

That included the Department for Communications, Climate Action and the Environment, which licenses exploration in the first place. A day after the announcement, all its officials could say was that the Minister, Richard Bruton, would bring a memo to Cabinet over the next month detailing the new policy.

The association welcomes the clarification that the new policy applies to future, rather than existing, licences. “However, it is also important that a sector which has already invested €925 million approximately into the Irish economy over the last decade fully understands what the Government has in mind,” she says.

The Government issued 28 exploration licences over the last three years. Some existing licences, for areas off the west coast, run until 2034. Shareholders include big industry names such as Exxon Mobil, Total and ENI, along with local players such as Petrel and Providence Resources.

A number of groups also have prospecting licences, which allow exploration anywhere in Irish waters. Rural west Cork and Kerry, which are closest to a big focus of activity, the Porcupine Basin, benefit most from the money that explorers spend here, the IOOA says.

Local players such as Providence and Petrel often do the initial work – generally seismic surveys that photograph the subsurface rock to help identify potential sources of oil and gas, and some exploratory drilling. They fund this by raising equity – selling shares in their companies to investors – as the business is too high-risk for banks to finance.

They frequently bring in bigger multinational partners to help fund later exploration stages and, on the rare occasion that a commercial find turns up, for development and production.

Varadkar was addressing the UN Climate Action Summit. He said the Government was following a request from the Climate Change Advisory Council, chaired by economist John FitzGerald, which maintained that oil exploration was not compatible with a “low-carbon future”.

The Taoiseach’s announcement was itself carbon neutral in the sense that the Republic produces no oil, therefore the industry is not responsible for any of our greenhouse gas emissions. The most recent Environmental Protection Agency (EPA) figures show that these reached almost 61 million tonnes in 2017.

Transport, which relies heavily on burning imported oil, was responsible for a fifth of this. Energy, which burns coal, natural gas, some of which we buy in from elsewhere, and more imported oil, came to another 19 per cent. The agency points out that 61 million tonnes is a small amount of greenhouse gas in global terms, but it says that the Republic still has some of the world’s highest emissions per person.

The phasing out of fossil fuel exploration makes no difference to this.

Confusion remains over how the phasing out will work. Did the reference to the Atlantic mean that the Government could issue further licences for the Celtic and Irish seas, which lie to the south and east of the Republic? Barryroe, the one confirmed commercial oil find in the Republic, lies in the Celtic Sea, just off the coast of Cork.

As this is close to the old Kinsale Head gas field, Providence Resources, Barryroe’s main shareholder, and other players, believe there is potential for further discoveries in the area.

At the same time, Varadkar’s proposal that we ban oil exploration, but allow the search for natural gas continue has left the industry bemused. Oil and gas come from the same source – the remains of decayed plants and animals that died about 300 million years ago – and are found together. The two are “invariably closely linked” according to the IOOA.

Teeling echoes this, saying the Taoiseach’s statement makes no sense. “You can’t explore for gas and not for oil; they come together,” he explains. One of the North Sea’s best-known discoveries, the Brent oilfield, contained four times as much gas as the Corrib reservoir off the west coast of Ireland.

This is further complicated by the fact that some reservoirs hold condensates, where the hydrocarbons behave like a gas while they are locked underground, but behave like a liquid when the pressure drops as they are released from the well. “How would this be dealt with when licensing?” an IOOA document asks.

The organisation suggests that either the Government does not understand how petroleum exploration works or that phasing out oil is simply a Trojan horse for an outright ban, which will follow once it becomes clear that a partial bar will not work.

Teeling argues that this will not be needed, as Varadkar’s announcement will simply halt all exploration. Drilling here is expensive. One exploration well – merely to tell you if oil and gas are there or not – can cost €1 million a day, or €120 million to €130 million in total. Delays in getting approvals from the department add to this.

In this environment, Teeling believes energy companies will see Varadkar’s announcement as a message that they are not welcome. They will stay away, or pull out of existing exploration licences and options. “There are hundreds of other places where they can lose money,” he says.

If no oil exploration means no gas exploration, this could have implications for long-term energy security.

According to EirGrid, the State company that operates the Irish electricity grid, about 60 per cent of the electricity we use is generated by burning gas. The company’s chief executive, Mark Foley, explains that, while the Government intends that renewables, such as wind and solar power, will meet 70 per cent of energy needs by 2030, gas will be the backstop. It will be sole fossil fuel that the Irish electricity system will use, making us very dependent on it, Foley notes. “It would be very wise to have as much of that as possible coming from Irish waters,” he says.

Denis O’Sullivan, managing director of Gas Networks Ireland, the State company that operates the natural gas pipeline, recently told the Oireachtas Committee on Climate Action, Communications and the Environment that the Corrib field gives the Republic greater security of supply. He also stressed to the politicians present that we would continue to need gas for the foreseeable future, even as we stepped up renewables’ contribution. A year ago, he indicated that we should continue the search to replace Corrib, which will run out in 2025.

If we are not going to replace the Corrib, our energy security has been compromised"

Teeling is blunter than either State company chief executive. Energy security, he says, is “gone”. He points out that Ireland is at the end of a gas supply line that runs through the tundra from Siberia. This is vulnerable to attack and, given growing global tensions, may not be relied on forever.

“If we are not going to replace the Corrib, our energy security has been compromised,” he says.

Councillor David Healy, the Green Party’s climate spokesman, dismissed the idea this week that we should rely on natural gas for security of supply. In a statement calling for the exploration ban to be explicitly extended to the fuel, he warned that its use would contribute to climate breakdown. “We need to drive investment towards renewable, grid upgrades, storage and hydrogen power, away from fossil fuels as fast as we can,” he said.

Against these arguments stands the fact that the Republic has never been fertile ground for hydrocarbon exploration. Texas-based Marathon Oil made the first significant find, the now empty Kinsale gas field, in 1975. More than 20 years later, Enterprise Oil unearthed Corrib, which is a small reservoir by international standards.

In 2012, the Fine Gael-Labour government, of which Varadkar was a member was offering exploration licences in the Atlantic margin, which stretches for hundreds of kilometres off the west coast, the publicity trumpeted that up to 10 billion barrels of hydrocarbons could be lying beneath Irish territorial waters.

Hopes grew that new extraction technology and rising prices would make oil trapped deep in the rock below the Atlantic viable. These were dashed the following year when Exxon Mobil abandoned a well it had drilled at a cost of €120 million after finding nothing. Others, including Corrib developer Shell, handed back licences in subsequent years.

Given the poor returns, why do they persist?

“The more you drill, the more likely it is you find something,” Teeling explains. He argues that if this does not hold true in the Republic’s case, there is no downside. It costs taxpayers nothing to let exploration companies spend money to drill here. “But the benefits of the industry could be significant,” he says. “People are going to consume hydrocarbons anyway: if it’s not going to be Irish hydrocarbons, it’s going to be Siberian hydrocarbons.”