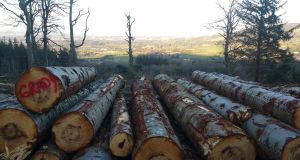 Given that few of us have left home for almost three months, we could be forgiven for forgetting that the UK has left the the EU this year. Despite its absence from the front pages, Brexit is still very much with us, posing more or less the same uncertainties as it did before Covid-19 commandeered the news agenda.

The UK is now in a transition phase, during which it and the EU are meant to work out future trade arrangements. That ends in seven months, but there has been little progress on reaching a deal.

State forestry company Coillte is one of thousands of businesses struggling to get to grips with what is now a four-year-old problem. Coillte harvests and sells timber and, through its Medite Smartply subsidiary, wood building products. If the EU and UK fail to agree trade terms, its products potentially face a 6 per cent tariff. Combine that with the likely impact of a Covid-19 recession on construction in the Republic and UK, and Coillte could be in for a tough time.

Timber prices, like those of all commodities, go up and down. They were down 20 per cent in Britain at the beginning of the year. That was down to oversupply. That may not be unusual in itself – too much of something generally pushes its price down.

However, the reason for the oversupply could be tied to another long-term problem, partly obscured by Covid-19. European foresters felled trees early to combat a parasite, the bark beetle, which, when left to its own devices, wreaks havoc on growing timber. One way to control the pest is to cut down trees.

Scientists warned that the chief culprit for the parasite’s arrival was hotter, drier summers brought on by – you’ve guessed it – climate change.

Businesses will still face the cost of tackling this problem, Brexit, plus all their usual challenges, even as they survey the damage done by the pandemic lockdown. It is probably time they were allowed get to grips with them once again.