Cantillon: A last-minute ban on alcohol being served would be badly received in the trade 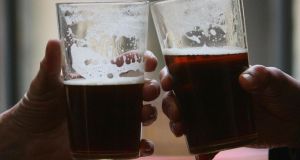 Under the State’s reopening roadmap, pubs were supposed to remain shut until August 10th, while restaurants and cafés were to be allowed open six weeks earlier. Photograph: Matt Cardy/Getty Images

The Licensed Vintners Association, the lobby group representing Dublin pubs, last week suggested that 40 per cent of its members that also hold restaurant licences were planning to reopen their premises next month on the same day as restaurants and cafés.

This has put public health authorities in a quandary over the scheduling of their economic reopening plan, leading to fears in the trade that the rules could be tweaked to thwart the publicans.

Under the State’s reopening roadmap, pubs were supposed to remain shut until August 10th, while restaurants and cafés were to be allowed open six weeks earlier. This infuriated publicans, who believed they were being treated unfairly. Many modern pubs, especially in city locations, are effectively gastro outlets that operate similarly to restaurants.

One option believed to be under consideration among public health officials is to allow the pubs with restaurant licences to open next month along with normal restaurants and cafés, but to ban all of them from serving alcohol on the premises, allowing off sales only.

That would scupper any risk of widespread drinking from wily customers walking into dual pub/restaurants for a plate of chips washed down by six pints.The corollary of this, however, is that it would also destroy any nascent hope of a return to profitable trading for traditional restaurateurs.

Selling food is not a particularly profitable pursuit. Restaurants make most of their return on the sale of wine and other beverages to accompany meals. No drink sales, allied with stringent capacity constraints through social distancing, would make it impossible for any of them to function.

On the Friday before the May 18th phase one retail reopening, homewares stores were suddenly pulled from the list at the last second to stop crowds of people congregating around places such as Ikea. A similar last-minute move on alcohol before June 29th phase three would be very badly received in the trade.

If it is to happen, pub and restaurant operators would prefer to know now, as for many, it may affect whether they decide to reopen at all.