Sale of shares in Petrel Resources cancelled due to non-payment 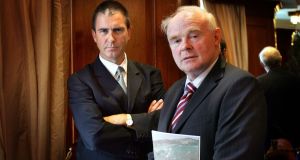 Oil and gas explorer Petrel Resources has said a tranche of shares due to be issued to part of the Tamraz group will be forfeited and cancelled due to non-payment of the subscription price.

The tranche of 64,035,976 shares were due to be issued to Netoil, a part of the Tamraz group, which is made up of United Arab Emirates-based Roger Edward Tamraz, and Michel Fayad and Said Mehraik, who live in France.

However, Petrel said on Monday that these shares will be cancelled from trading on AIM with immediate effect.

Petrel, which is chaired by John Teeling, recently got the High Court to bar Tamraz from unlawfully selling shares in the Irish company.

The trio held 100 million Petrel shares directly and through a company, and had agreed not to sell them before next August under the terms of an investment deal concluded in November.

Petrel maintains that it found in January that they had sold shares in breach of this agreement. It said on Monday the Tamraz group has not recovered or replaced the circa 5.25 million shares pledged and sold in breach of the lock-in agreement.

Petrel is mainly active in Ghana but also holds several exploration licences in the porcupine basin off the Irish coast.