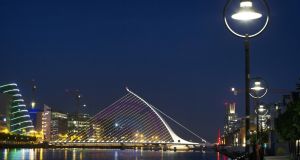 If the data now shows that ending lockdowns has no real negative impact on infections rates, the Government should take note. Photograph: Leon Farrell/Photocall Ireland/PA Wire

For Government Ministers wary about reopening the economy and the prospect of a new spike in infections, there was good news this week from the US.

Investment bank JP Morgan has consistently predicted market reactions, as well as accurately predicting the timelines of economic reopenings since the crisis began. On Thursday its researchers Marko Kolanovic and Bram Kaplan issued a new data-rich note to the bank’s clients.

Their research shows that almost all US states that have reopened so far have not witnessed any fresh resurgence in coronavirus.

Kolanovic and Kaplan collated the virus R0 rates (the rate at which infections are passed between people) in each US state. They compared the rates in each case on the day lockdown ended with the most recent R0 measurement: “Virtually everywhere, infection rates have declined after reopening.”

While acknowledging that lockdowns were justified on the basis that politicians had little reliable data at the time, and decisions had to be taken on the hoof, the researchers appear to have become lockdown sceptics after crunching the numbers.

They say the evidence suggests measures such as social distancing and hand-washing must have done most of the heavy lifting in the fight against infection, rather than the full economic lockdowns.

“Unlike rigorous testing of potential new drugs, lockdowns were administered with little consideration that they might not only cause economic devastation but potentially more deaths than Covid-19 itself.”

Taoiseach Leo Varadkar and Minister for Health Simon Harris, together with their Cabinet colleagues, had a huge call to make in March as the virus came over the hill. They went for lockdown, as there was no other realistic policy option open to them at the time.

But if the data now shows that ending lockdowns has no real negative impact on infections rates, they should at least take note.