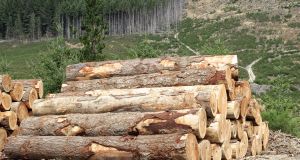 Mark McCauley, director of Forest Industries Ireland, told the Joint Oireachtas Committee on Agriculture that contractors and hauliers have already lost their jobs because of the crisis. Photograph: Getty Images

Department of Agriculture delays in processing forestry licence appeals is costing jobs in the timber industry, politicians heard on Tuesday.

The Oireachtas recently passed new laws streamlining the forestry licensing system, but industry figures say that the department has yet to provide resources needed to tackle a backlog that threatens timber supplies.

Mark McCauley, director of Forest Industries Ireland (FII), told the Joint Oireachtas Committee on Agriculture that contractors and hauliers have already lost their jobs because of the crisis. “Irreparable damage is being caused to the sector,” he warned.

Tree felling, planting and all other forestry activity must be licensed under the Republic’s laws.

However, the industry says that the department’s Forestry Appeals Committee (FAC) is failing to deal quickly enough with a growing number of appeals against these licences, holding up tree harvesting and timber production.

Figures recently produced by the FII claim that enough timber to build 50,000 new homes was caught in the backlog by the end of August.

FII chairman Peter O’Brien warned that an industry employing 12,000 people was on a precipice.

“This industry is in an absolute crisis and that crisis lies with the management of the Department of Agriculture, Food and the Marine, ” he said.

Mr McCauley’s opening statement to the committee argued that the department’s forestry service was not issuing enough new licences, while there was a huge backlog of appeals.

“There is a backlog of around 2,000 applications awaiting approval and the run rate of licences being issued is about a quarter of what the sector needs,” he said.

Mr McCauley argued that the industry depended 100 per cent on a functioning licensing system.

Without this he predicted that jobs would be lost while the Government’s own forestry targets would not be met.

“The problem with licensing is exacerbated by a further backlog of 500 projects under appeal in the Forestry Appeals Committee,” he pointed out.

He said that the committee should be reformed to allow it deal with more than than 100 appeals a month.

“Since the start of the year, the FAC has only processed around 26 projects a month,” Mr McCauley added.

Sawmills have begun importing timber from as far away as Russia, despite the fact that the Republic has more than enough to meet its own needs.

Mr McCauley said that the industry was waiting for the department to implement the recent amendment to the Forestry Act 2014, which was meant to reform the FAC.

He told the committee that the FII had recently discussed the issue with the Minister of State for Land Use and Biodiversity, Pippa Hackett, and her officials.

“We remain unconvinced that the FAC will be able to deliver if it keeps going the way it is going,” Mr McCauley said.