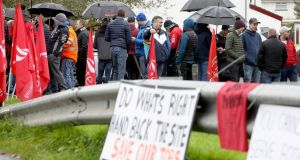 Wrightbus workers outside the plant in October as talks to find a prospective buyer continued inside. Photograph: Paul Faith/AFP via Getty

The new owners of the Wrightbus factory said the Ballymena bus builder had made its first delivery of 36 buses since the company was bought out of administration.

The buses are part of an order valued at £13 million for 55 vehicles for the First Group, which plans to use them in Leeds.

The Bamford Bus Company, which formally took control of Wrightbus last month, said delivery of the buses to transport operator First Group was “a clear signal of our intent to drive forward the Wrightbus business and grow the company”.

The Ballymena bus builder, which had previously employed 1,200 people, collapsed into administration in September.

It had been one of Northern Ireland’s largest manufacturers and had previously built London’s iconic red Routemaster double decker bus, known as the “Boris bus”.

Its new owners said they were now focused on stabilising the business and intend to use their “expertise and experience” to continue to promote the Wrightbus brand across the world.

The administrators had previously retained 60 workers while they sought a buyer for the bus manufacturer. These 60 are now employed by the Bamford Bus Company, which is hoping to get a “full production line” up and running in the new year.

Buta Atwal, chief executive of Wrightbus, believes the UK government’s recent announcement of a new national bus strategy in 2020, which will champion decarbonisation, provides the Ballymena company with a new avenue for growth.

Mr Atwal added: “We enter an exciting period during which Wrightbus has the opportunity to lead the way given our track record in manufacturing state-of-the-art zero emission hydrogen buses as well as electric and hybrid models. We are looking to the future with much optimism.”

The trade union Unite said it understood that workers might be recruited to Wrightbus on a “temporary” basis to begin with.

The Ballymena company had won a number of orders before its financial difficulties, and these remained uncompleted in addition to its new owners plans to win new business.

George Brash, regional officer with Unite, said it was vital that once the Bamford Bus Company began to recruit on a larger scale, that all of the positions became permanent.

“We will be pushing for permanent jobs and for terms and conditions to protect workers in Wrightbus,” Mr Brash said.

In the meantime the union is working hard to ensure the 1,000-plus workers who lost their jobs in September would receive their redundancy payments in the next couple of weeks.

“We’re really hoping that they will get some sort of financial respite from everything they have been through before Christmas. It has been a very hard time for them and their families,” Mr Brash said.

1 Chris Johns: Boohoo exposed on pay and conditions in digital economy
2 In this strangest of recessions, what happens next for Ireland?
3 Hotel bookings collapse in wake of additional Covid restrictions
4 Should I switch bank now with Ulster Bank at risk of closing?
5 Bank of Ireland sees about 2,000 staff apply for voluntary redundancy
6 Michael O’Leary is the boss you want to lead an airline out of crisis
7 ‘Working remotely requires more individual contact, not less’
8 Best Covid-19 ‘influencers’ will avoid hectoring
9 Qatar Airways got €1.7bn government lifeline after losses widened
10 Fortnite owner signs multimillion deal to buy Irish ‘kidtech’ firm
Real news has value SUBSCRIBE