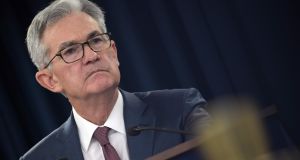 US central bankers see a “sustained expansion” ahead for the country’s economy, with the full impact of recent interest rate cuts still to be felt and low unemployment boosting household spending, Federal Reserve chairman Jay Powell said on Wednesday in remarks that brushed aside any worries of a looming slowdown.

“The baseline outlook remains favorable,” and the current level of interest rates “appropriate,” Mr Powell said in remarks prepared for delivery to the joint economic committee of congress, a panel that includes some members from the House of Representatives and Senate.

His comments tracked closely to those in his news conference last month after the US central bank cut rates for the third time this year and signaled it was likely done reducing borrowing costs absent a significant change in the economic outlook.

Despite “noteworthy risks” including slowing global growth and fallout from the US-China trade war, “my colleagues and I see a sustained expansion of economic activity ... as most likely,” Mr Powell said in his prepared remarks for the hearing.

Investors have largely accepted the Fed’s intent to keep interest rates on hold well into next year. New data on Wednesday showed US consumer prices rising by the most in seven months in October, consistent with the Fed’s expectation that the pace of price increases will rise to its 2 per cent target.

“What investors see is an economy that’s not too hot and not too cold. The Fed seems to see it that way too, so right now Fed and investor interests are aligned,” said Rick Meckler, a partner at Cherry Lane Investments in New Vernon, New Jersey.

Mr Powell’s opening remarks did come with a caveat: In the event a downturn does take hold, elected officials will need to be prepared to fight it with fiscal policy, and that may be hard given that federal debt is “on an unsustainable path.”

“High and rising debt ... could restrain fiscal policymakers willingness or ability to support economic activity during a downturn,” Mr Powell said in comments that wade into a controversial and evolving debate over how much government borrowing is sustainable.

Some economists argue there is much more room than thought while others feels that the return to $1 trillion annual federal deficits under the Trump administration will cause trouble eventually.

But there is broad agreement that in a serious recession, the Fed may also be constrained. Interest rates are low by historic standards, leaving little room to stimulate the economy with rate cuts alone, and there is debate about how effective other Fed tools may be in the future.

After three rate cuts this year, the Fed signaled at its policy meeting last month that it was likely done for now, leaving its overnight target interest rate in a range of between 1.50 per cent and 1.75 per cent.

Powell repeated in his testimony that the Fed was unlikely to use its remaining capacity to cut rates unless there is a “material reassessment of our outlook.”

The rate cuts, which came during a year of hectoring by President Donald Trump for lower borrowing costs but also evidence of slowing growth in key sectors like manufacturing, were approved “to provide some insurance against ongoing risks,” Mr Powell said.

The full impact, which may already be showing up in stronger housing activity, “will be realised over time,” he said.

“We see the current stance of monetary policy as likely to remain appropriate with our outlook of moderate economic growth, a strong labor market, and inflation near our symmetric 2 per cent objective,” Mr Powell said. – (Reuters)