Wolfgang Munchau: Does Trump want to destroy the EU? 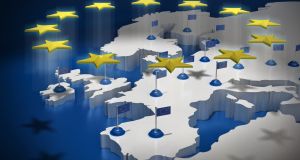 The EU’s instinct over the past decade has been to do the minimum necessary – a policy that has left it pathetically weak.

Does president Donald Trump want to destroy the EU? We cannot answer this question definitely, but the signals he has sent out suggest the bloc should take the potential threat more seriously than it is.

Just consider this statement by Ted Malloch, the man widely tipped to be Trump’s ambassador to the EU. Malloch, a professor at the Henley Business School at the University of Reading, said he wanted to “short the euro”. The single currency was at risk of collapsing within the next 18 months, he said.

I am not the greatest euro optimist myself, but I would be happy to be a counterparty to this particular trade. The worst-case scenario for the euro is not its total annihilation but the loss of one of its members.

More worrying for the EU than a tough-talking would-be diplomat are the trade negotiations that will follow last Friday’s meeting between Trump and Theresa May, the British prime minister.

Opponents of Brexit in the UK have dismissed the possibility of a trade pact with the US on the grounds that Trump’s protectionist agenda would affect Britain as well. Except that this deal will not be primarily about trade. It will be a political deal, a vehicle to sow discord between the UK and the EU, the one trade deal Trump may go soft on for strategic reasons.

This is why the hard-bargain rhetoric on Brexit by some politicians in Brussels is counter-productive because it drives the UK into the hands of Trump. It is in the EU’s interests to maintain an open relationship with the UK. Britain would get more out of a fair deal with Europe than from even the cosiest agreement with Trump. The UK will always trade more with the EU than the US.

The second, perhaps more imminent risk to the EU’s internal cohesion would be a unilateral lifting by Trump of sanctions against Russia. This has not happened yet but if it did, it would scupper the Minsk process through which the EU, Russia and Ukraine have organised their trilateral relationship since Russia’s annexation of Crimea.

The European sanctions would at this point become not only politically but also physically impossible to sustain. European investors would be able to easily circumvent many of the restrictions.

Such a decision would potentially destabilise and isolate Angela Merkel, the German chancellor, who has been pivotal in shaping the EU’s diplomacy towards Russia, at home and in the EU. It would play into the hands of her coalition partners, the Social Democrats, ahead of September’s election.

In view of those threats, the EU should consider the following four actions.

First, I would urge an immediate increase in defence spending to 2 per cent to fulfil the Nato commitment. Many EU countries are vulnerable to accusations that they have not contributed their fair share. With pending elections in France and Germany, and quite possibly in Italy, this is not the best time for the EU to produce a grand joint defence initiative beyond what is already in the pipeline. But an increase in defence spending can be achieved.

Second, the EU should fast-track the talks around Article 50, the mechanism for exiting the union with the UK. Brussels should seek to negotiate a provisional, narrow free-trade deal that requires only approval by the European institutions, rather than the national parliaments of the remaining 27 member states. A fast-track Brexit pre-deal would benefit both sides. A more comprehensive agreement could come later.

Third, the EU should consider entering into an economic relationship with China. Trump’s decision to revoke the Trans-Pacific Partnership, and the now certain demise of the Transatlantic Trade and Investment Partnership between the US and the EU, will open the way for new economic alliances.

Fourth, the EU will need to fix the euro zone, and not just to frustrate Malloch’s proposed shorting. This crisis is in its eighth year. The EU needs to stop quarrelling about Greece or fretting about whether the euro can survive the next Italian elections.

There are not many options left to fix the eurozone. The history of monetary union has shown us that it needs to be embedded in a political union to be sustainable.

The EU’s instinct over the past decade has been to do the minimum necessary - a policy that has left it pathetically weak. Europeans should stop hyperventilating about Trump but look at what the EU needs to do. It will not be able to muddle through for four years, let alone eight, of a Trump presidency.