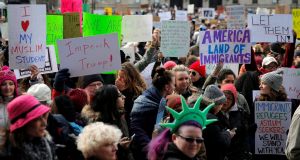 Most US corporate bosses have stayed silent on president Donald Trump’s immigration curbs, underscoring the sensitivities around opposing policies that could provoke a backlash from the White House.

While the leaders of Apple, Google and Facebook emailed their staff to denounce the suspension of the US refugee programme and the halting of arrivals from seven Muslim-majority countries, many of their counterparts in other industries either declined comment or responded with company statements reiterating their commitment to diversity.

The difference in response shows the pressure large swaths of corporate America faces to avoid tussling publicly with the new administration.

Companies such as aircraft maker Boeing and car makers Ford and General Motors have already had run-ins with Mr Trump over other issues, and they have much at stake in policy decisions that the administration will make on tax, trade and regulatory matters.

Before office, Mr Trump attacked Boeing over the cost of the future Air Force One programme. Boeing chief executive Dennis Muilenburg met with him earlier this month and said he and Mr Trump had made progress on the Air Force One issue and the potential sale of fighter aircraft.

Wall Street, meanwhile, is hoping the new administration will ease some of the regulations introduced in the wake of the 2007-08 financial crisis and adopt a lighter touch in their enforcement.

Industries including banking, healthcare and auto manufacturing “see themselves on the cusp of a new era of deregulation, and they do not want to do anything that would offend the new emperor”, said Cornelius Hurley, director of Boston University’s Center for Finance, Law & Policy.

Mr Trump had targeted both the tech industry and Wall Street during his presidential campaign, but once elected, he tapped former investment bankers, hedge fund managers and private equity investors to join his administration. With friends in high places, Wall Street may have less reason to be as outspoken about the new restrictions.

“Bankers have direct access to this White House,” said Erik Gordon, who teaches at the University of Michigan’s Ross School of Business. “They don’t have to protest publicly.”

Representatives of Goldman Sachs Group, Citigroup, Bank of America and Morgan Stanley declined to comment on Mr Trump’s immigration order. Wells Fargo said in a statement that it was reviewing the executive order and its implications for staff and its business. JPMorgan Chase’s operating committee, which includes chief executive Jamie Dimon, sent a note to staff saying it was reaching out to all employees affected and noted that the country was, “strengthened by the rich diversity of the world around us”.

To be sure, some CEOs were more outspoken. Nike chief executive Mark Parker said the company did not support the executive order.

“Nike believes in a world where everyone celebrates the power of diversity,” he said in a statement. “Those values are being threatened by the recent executive order in the US banning refugees, as well as visitors, from seven Muslim-majority countries.”

Brent Saunders, chief executive of drugmaker Allergan, tweeted: “Oppose any policy that puts limitations on our ability to attract the best & diverse talent.”

But many boardrooms kept quiet. Representatives for some energy companies, including Exxon Mobil, for example, declined to comment.

As the idea of corporate social responsibility has taken root, so companies have increasingly championed a range of causes, including gay rights, diverse workplaces and a global view.

Many in corporate America are still trying to work out how to deal with a new government that takes a more conservative stance on some social issues and has an anti-globalisation platform.

Those non-tech companies that did issue statements over the weekend tended to emphasise their role as good corporate citizens rather than openly criticise Mr Trump’s policies.

Starbucks chief executive Howard Schultz has put the coffee chain in the national spotlight before, asking customers not to bring guns into stores and urging conversations on race relations. In a letter to employees, he said Starbucks was developing plans to hire 10,000 refugees over five years across dozens of countries, but he did not directly criticise Trump’s order.

“I am hearing the alarm you all are sounding that the civility and human rights we have all taken for granted for so long are under attack,” he wrote.

In his statement, General Electric chief executive Jeff Immelt told staff that the company would engage with the US government. “We will continue to make our voice heard with the new administration and Congress, and reiterate the importance of this issue to GE and to the business community overall,” he wrote.

One of the most immediate ways for corporate bosses to communicate with Mr Trump about the immigration order will be the first meeting of his advisory panel of business leaders next week.

Of the 19 leaders on that panel, only two, Elon Musk, who founded Tesla Motors and SpaceX, and Travis Kalanick, chief executive of Uber Technologies, have spoken out against Mr Trump’s immigration curbs.

A spokeswoman for Stephen Schwarzman, the billionaire chief executive of Blackstone Group whom Mr Trump tasked to set up and chair the panel, declined to comment.