Consumers and businesses lift US growth in second quarter

GDP rises 2.6 per cent, leaving Fed on track to raise rates for third time this year 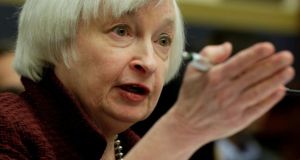 The US economy accelerated in the second quarter as consumers ramped up spending and businesses invested more on equipment, confirming that the sluggish performance early in the year was temporary.

Gross domestic product increased at a 2.6 per cent annual rate in the April-June period, which included a boost from trade, the US commerce department said in its advance estimate on Friday.

Growth for the first quarter was revised down to a 1.2 per cent rate from the previously reported 1.4 per cent pace. First-quarter growth was the weakest in a year.

The rebound in growth, together with a tightening labour market, likely leaves the Federal Reserve on course to announce a plan to start reducing its $4.2 trillion (€3.6 trillion) portfolio of treasury bonds and mortgage-backed securities in September as well as raise interest rates for a third time this year.

The US central bank left rates unchanged on Wednesday and said it expected to start winding down its portfolio “relatively soon”.

The increase in output was in line with economists’ expectations.

The dollar fell against a basket of currencies after the release of the data, while prices for US government bonds rose.

The economy grew 1.9 per cent in the first half of 2017, making it unlikely that GDP would top 2.5 per cent for the full year. US president Donald Trump has set an ambitious 3 per cent growth target for 2017.

While the Trump administration has vowed to cut corporate and individual taxes as part of its business-friendly agenda, Republicans’ struggles in Congress to pass a healthcare restructuring have left analysts sceptical on the prospects of fiscal stimulus. So far, the impasse in Washington has not hurt either business and consumer confidence.

A resurgence in consumer spending accounted for the bulk of the pickup in economic growth in the second quarter. Consumer spending, which makes up more than two-thirds of the US economy, grew at a 2.8 per cent rate. That was an acceleration from the 1.9 per cent pace logged in the first quarter.

But with wage growth remaining sluggish despite the labour market being near full employment, there are concerns that consumer spending could slow in the third quarter. Annual wage growth has struggled to break above 2.5 per cent.

Business spending on equipment rose at an 8.2 per cent pace in the second quarter, the fastest since the third quarter of 2015. It was the third straight quarterly increase.

Spending on mining exploration, wells and shafts grew at a 116.7 per cent rate, slowing from the first-quarter’s robust 272.1 per cent pace. As a result, investment on nonresidential structures increased at a 4.9 per cent pace, moderating from the January-March period’s brisk 14.8 per cent rate.

Businesses continued to carefully manage their inventories in the second quarter but spent more in some places. Inventory investment was neutral to GDP growth after slicing off 1.46 percentage points in the first quarter.

Housing was a drag on growth in the last quarter, with investment on homebuilding contracting at a 6.8 per cent rate, the worst performance since the third quarter of 2010.

Alongside the second-quarter GDP report, the government published revisions to data going back to 2014, which showed little change in the growth picture. – (Reuters)