Who’s negotiating in Brexit talks for the EU? 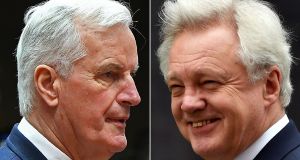 The European Union’s negotiating team has decades of combined experience at the heart of the European Commission, the bloc’s executive arm. Here are the main negotiators:

Appointed by European Commission President Jean-Claude Juncker last year, the Frenchman has served his country as foreign minister and minister for European affairs among other positions. He has worked as European Commissioner for regional policy and the internal market and services, overseeing reform of the financial sector. He was also elected to the European Parliament.

A German trade expert, Weyand has spent more than two decades working in the European Commission. She began working on international car trade in the industry department in the mid-1990s, moved on to the cabinet of then EU trade chief Pascal Lamy and served as an adviser to the previous commission president, Jose Barroso. She spent a year at Cambridge University in 1986 while studying political science, economics and English literature.

An economist, Riso worked for Oli Rehn when he was European Commissioner in charge of economic and monetary affairs and the euro. She then worked as a head of unit in the commission’s economic and finance division and then its budget office, specializing in the EU’s multi-year financial framework.

Head of cluster for horizontal issues, cross-cutting policies and level playing fieldPesaresi is a graduate of Yale University and Bocconi University and has headed various units at the Commission, including state aid policy and competition. He joined the Commission in 1999 and previously worked for the Bank of Italy.

Head of cluster for internal markets and sectoral policies

Arbault joined the European Commision in 1995 and was a member of Barnier’s private office during his time as a commissioner. He ran the “industrial property” unit within the Commission’s growth division and was also seconded for a time to the European Court of Justice. He also worked for former vice president Jacques Barrot.

Head of cluster for budget, spending commitments and programs

A long-time budget negotiator, Bertrand will be critical in negotiating the financial settlement the EU wants the UK to pay.

Head of cluster for international agreements and customs

An official at the European Commission since 1997, he ran the investment unit and also served as director general for international trade and investment. He also worked on World Trade Organization dispute settlement.