Interview: Angela McGowan, the CBI’s regional director for the North

Brexit, the DUP’s shopping list, North-South trade, and the need to restore the assembly 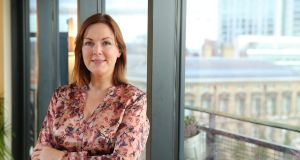 Angela McGowan: “If the DUP go into the talks and they focus very much on economic asks...then I don’t see how that could be bad for Northern Ireland”

Angela McGowan admits that Brexit has cost her a few nights’ sleep. The Confederation of British Industry’s (CBI) regional director for Northern Ireland says the “enormous complexities” involved in the whole exercise frequently leave her wondering where it will all end, particularly for the place and members she represents in the UK’s foremost business organisation.

“We are never going to be better off outside the EU,” she says.

A year ago, while she was Danske Bank’s chief economist in Northern Ireland, McGowan was arguing this point as a firm advocate for staying in the bloc.

Last October she moved to the CBI, and the move put her in a central role in a region that threatens to be a flashpoint in the Brexit talks – they begin next week between UK prime minister Theresa May and Brussels’ lead negotiator Michel Barnier.

The North is literally Brexit’s front line. Once the UK leaves the bloc, it will mark its only land border with the EU.

Almost two decades of peace and growing integration have rendered that Border all but non-existent. Tampering with that could damage both Northern Ireland and the Republic. Some 34 per cent of the goods and services that the North exports go to the Republic, while more than 70 per cent of its international tourists arrive via the South.

McGowan says the ties run much deeper than that. “Many businesses in Northern Ireland have built up supply chains that work both ways, buying product in the Republic of Ireland, bringing it back up North to process for sales back into the Republic. So the movement of goods, the movement of people across the island is important for our economy. We need to keep that Border open.”

It is not just trade. There are 34,000 bus and train journeys across the Border every week, or 1.8 million a year. The two jurisdictions share a single electricity market, and their networks are moving from partial to full integration.

The CBI and its sister organisation in the Republic, Ibec, recently published a study showing that a planned second high-voltage line joining Meath and Tyrone would help cut electricity bills and secure future power supplies North and South.

McGowan warns that a return to a hard Border, in any shape or form, would threaten the peace process which underwrites the North’s economy.

While these concerns have been well aired in Ireland, they have not featured much in the debate in Britain. That is until last week’s UK general election left Arlene Foster and 10 DUP MPs holding the balance of power in a hung parliament.

“I think it can only be a good thing to have our voice heard at the table,” McGowan says.

She believes that in return for its support the party’s shopping list should feature the things that all sides in the North agree would be good for the region such as trade, supporting agri-food and developing all-island infrastructure.

“If the DUP go into the talks and they focus very much on economic asks around those areas, then I don’t see how that could be bad for Northern Ireland.”

McGowan’s bottom line is that the new British government needs to see that in order for the North’s economy to succeed it needs a close relationship with the EU and its half a billion consumers.

While the DUP campaigned to Leave, McGowan agrees that the party does not favour a hard Brexit. Nor do Britain’s post-electoral maths. She points out that as 55.8 per cent voted for parties that wanted either a soft exit or opposed leaving the EU altogether, and 44.2 per cent voted Conservative and UK Independence Party, May has no mandate for the hard option which threatens to do the most damage to Irish interests North and South.

“I think there has been a big signal from the electorate that a hard Brexit is not what the UK wants.”

That comes as some relief to her. Before the election she felt that things were not going Northern Ireland’s way; now there is at least a glimmer of hope as she believes May cannot continue in the direction she indicated before the voters spoke.

“It would be a very strange leader that does not listen to what the electorate tells her. She may not, but then people within her party are going to have to address that challenge.”

However, it is May that will be sitting down across form Barnier next week. So how does McGowan believe the British premier should approach the talks?

“From a Northern Ireland perspective you want any head of state to be a good negotiator. You want them to have good diplomacy skills, you want them to build good relationships with an economic area that we have significant trade with.

“We need people that have an understanding of the economy in those talks, and recognise that there’s more to running a country than just migration quotas.”

Plenty will disagree, but McGowan says that the Brexit debate could do with more, not less, economics. She argues that even the historically business-friendly Tories appear to have missed several key points.

For instance, they get excited about doing deals with far away countries such as Australia, ignoring normal economic wisdom that trade flows increase the closer you are to a large market, such as the EU.

“But the Brexit debate was not about economics, it was about migration, quite simply,” she says.

Immigration has been good for Northern Ireland, and many of McGowan’s members want and need to hire workers from the EU so they can continue to grow. She says the arrival of workers from eastern Europe after EU enlargement in 2004 boosted Northern Ireland’s productivity, which lagged the rest of the UK.

“Polish workers came to Northern Ireland and made a contribution, and that’s when we made our biggest gains. With a population of 1.8 million people you need to have population growth and access to international workers if you are going to succeed economically.

“One of our big asks is to get rid of that target in the Conservative manifesto around immigration. That does not sit well with the business community. It does not make any sense, and if that 100,000 was imposed on a pro-rata basis Northern Ireland would be allowed 3,000 people.

“There would be companies in Northern Ireland that have five-year corporate plans, and want to grow by another 2,000 to 3,000. Those companies have big ambitions to grow, and they cannot do that if they do not have access to skills.”

She says the reality for Northern Ireland is that it needs full access to the Republic, the EU and the benefits of the Single Market and free movement.

Does she think that suggestions such as Taoiseach Leo Varadkar’s idea that the region get special status could work?

McGowan stops short of endorsing anything of that nature, pointing out that the CBI does not want to involve itself in constitutional debates. “We prefer to leave that to the politicians.”

The economics bug bit McGowan at school, where she says a good teacher sparked her interest. She did the subject for her A levels (the equivalent of Leaving Cert). “I just seemed to flow into it at university. Maybe you just fall into these things. I found it easy enough to study, it resonated with me, and I connected with it as a subject. It was never a chore. It was a practical subject. It made real world sense to me.”

She is the first woman to head the CBI in Northern Ireland, largely, she says, because her predecessor, Nigel Smyth, was there for 27 years.

“I don’t really see it as a male-female thing. It was just the right fit for me at the time, and I went for it and I got it.”

Before the CBI she spent eight years at Danske. She began her career as a research associate in the economics department of Queen’s University Belfast. Appropriately, one of her first projects was studying the impact of EU environmental legislation on the Republic, UK, Italy and Germany.

She then went to work for the Northern Ireland Economic Council, now merged with the Economic Research Institute, which was a policy-oriented think tank set up to advise the secretary of state for Northern Ireland. She spent five years weighing the likely impact of different policy proposals on the economy and providing research documents to policy-makers.

McGowan is “Northern Ireland born and bred” in her own words. She grew up in Belfast, but now lives in Hollywood, Co Down, which is also home to golfer Rory McIlroy.

Her husband, Peter, is a Dubliner and also an economist. He works for the Republic’s Central Bank, and is one of many who commutes between the two jurisdictions. They have two teenage sons, Dermot and Rory, who are currently studying for exams.

CBI Northern Ireland does its own share of Border-crossing courtesy of a long-standing relationship with Ibec.

Chief executives from the Republic and North meet three times a year at a joint business council to discuss those issues. Both organisations are planning more reports – a further one on the energy market and one on the all-Ireland economy, which will try to put a value on that and pin down some key statistics.

A key local concern for McGowan and the CBI is the restoration of power-sharing and the Stormont Assembly, suspended since the elections earlier this year.

“We at the CBI absolutely support a devolved government in Northern Ireland. The power-sharing arrangement brought about by the Good Friday agreement brought both peace and prosperity to this region after 30 years of conflict.

“For the business community, getting the political institutions up and running again is important for our international reputation, for attracting direct foreign investment and for offering young people a shared and peaceful future.”

1 Will brother’s widow get half of our parents’ estate when they die?
2 Should I switch bank now with Ulster Bank at risk of closing?
3 Banks face ‘hectic’ loan restructuring as payment breaks end, Goodbody warns
4 ‘I have three children and a dog, so I feel like a bit of a human ATM’
5 Save yourself money and heartache by reviewing your house insurance
6 Finance Ireland refinances mortgages with low level of payment breaks
7 EU said to be leaning towards appealing Apple tax decision
8 Aldi and Lidl at back of queue during UK pandemic
9 Belfast mailbox address used by account holder in Russian money-laundering scheme
10 Household wealth grew by €76,000 in years following financial crash
Real news has value SUBSCRIBE