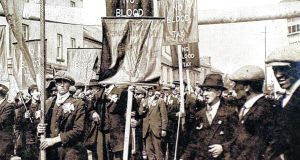 A protest in Ballaghaderreen, Co Roscommon against conscription in 1918. The issue of home rule or independence dominated the concerns of that time, not the grave risk to public health. Photograph: Photo12/UIG/Getty Images

In popular history, the period covered by our decade of commemorations is dominated by the first World War, the struggle for independence and the Civil War.

Yet the “Spanish” flu epidemic of 1918-19 resulted in about 25,000 extra deaths in Ireland, many of them young adults. This was almost as many deaths as occurred among the Irish fighting in the first World War, and greatly exceeded the estimated 5,000 who lost their lives in the War of Independence and the Civil War.

Although the individual tragedies of the flu deaths, and of the young families often left behind, affected a large number of people, that story has largely been obliterated from popular memory. The work of historians such as Dr Ida Milne has documented this forgotten tragedy. And President Michael D Higgins, whose uncle died in the epidemic, spoke of “collective amnesia” about it, when he hosted a seminar with relatives of those affected.

The world has learned some lessons from the terrible 1918-19 epidemic, which informs our response to the Covid-19 crisis. We appreciate the truly devastating scale of that pandemic, which was largely unchecked; some estimates suggest that, proportionate to today’s world population, the toll was equivalent to between 200 million and 400 million deaths.

The 1918 flu epidemic began early that year and it appears initially to have been quite mild. However, it returned with a vengeance across the world in the autumn of 1918. The flu initially spread very rapidly through military formations. With the ending of the war, returning troops helped spread it among the civilian population in Ireland and elsewhere.

The last quarter of 1918 saw a very high death rate from the flu, especially in Dublin and Belfast, where an exceptional 0.4 per cent of their populations died from flu. However, up to the end of 1918 there were relatively few deaths in Connacht, probably reflecting low levels of travel.

The flu outbreak saw the postponement of the 1918 All-Ireland Finals until 1919. The Irish Times of October 28th, 1918 reported that the 88-year-old Sir Charles Cameron, the Tony Holohan of the day, said: “If the public would only wake up to the seriousness of the condition of things and avoid meeting in crowds, the risk of spreading the infection might be minimised.”

Unfortunately, his advice was largely ignored. While many cultural events were cancelled, the campaign for the December 1918 election saw major rallies throughout the country. The issue of home rule or independence dominated the concerns of that time, not the grave risk to public health.

The medical professions were particularly badly affected, with deaths of nursing staff in hospitals such as St Vincent’s and the Richmond. Dr Kathleen Lynn was arrested for her revolutionary activities, but immediately released on condition she would practise medicine, not revolution.

The failure to lock down the country probably played a major role in reigniting the epidemic after Christmas. As a result, while Connacht and rural areas had been spared some of the earlier devastation, the death rate peaked in these areas in the early months of 1919.

Over the two years 1918-19, the flu resulted in the death of almost one in every 100 men and women aged between 25 and 34 in Ireland. There were also heavy death rates in the rest of the population between the ages of 15 and 55.

However, for those over 65 there was very little impact; they seemed to be largely immune.

This time round, while extremely contagious, Covid-19 fortunately seems to have inflicted a much lower death rate as a proportion of the overall population. However, unlike a century ago, the elderly are this time most at risk and the younger generation – those aged under 55 – seem much more resilient, although some deaths among younger people have occurred.

A century ago the political system largely ignored the public health crisis and, in a much less sophisticated economy, the financial costs were dwarfed by the after-effects of the war.

This time round, the political system has taken the epidemic very seriously. While the death toll is likely to be much lower than in 1918-19, the economic costs are going to be huge, even if there is a rapid economic recovery.

I expect this epidemic, with its dramatic impact on daily lives and economic activity going well beyond the families who have lost someone to the virus, is likely to be long remembered in history. Public health will be given much greater priority in the future as we realise how quick and how deadly the spread of infection can be in today’s interconnected world.