Smart Money: The path of borrowing costs is vital for households – and for the State 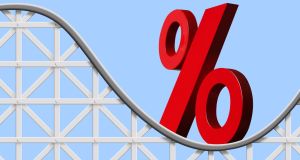 The recession means all the drive now is to keep interest rates low. But how long can this last?

Interest rates on international markets are at record lows, with the NTMA raising seven and ten years borrowings for Ireland on Thursday at negative interest rates.

And while there are ongoing rows about the level of borrowing costs in Ireland compared to elsewhere in the EU, the cost of mortgages are at low levels by historical standards.

The recession means all the drive now is to keep interest rates low. But how long can this last? Are we in a new paradigm? Here are the key points

Over recent years the time when euro zone interest rates were going to start heading upwards has always seemed a couple of years away. But, bar a revival in euro zone growth in 2016, the euro economy and inflation have never looked like rising enough to get the ECB to move.

And now all the talk is of easing policy to fight the Covid-19 recession. This means the ECB’s base rate is likely to remain at zero for a prolonged period and the central bank has promised to keep pumping money into euro zone bond markets until at least June, 2021 under its emergency pandemic programme.

The extraordinary hit to economic growth from Covid-19 has pushed any possible interest rate rise another couple of years into the future, at least, and quite probably longer.

The ECB’s latest growth projections “highlight the huge hit to economic activity facing the euro zone, with the staff projection assuming an unprecedented drop in annual output of almost 9 per cent this year, with output projected to return to its end-2019 level only at the end of 2022,” according to Simon Barry, chief economist at Ulster Bank in Dublin.

“ Furthermore, the large amount of resulting economic slack means that Covid-19 is likely to be disinflationary over the medium term, with inflation seen at just 1.4 per cent at the end of 2022, ”he said. This is well below levels that are consistent with the ECB’s inflation aim of “close to but below 2 per cent”.

Could the ECB actually reduce interest rates, either its base rate, now at 0 per cent, or other official rates, such as that paid to banks for depositing money, already in negative territory at minus 0.5 per cent ?

This is possible, Barry says,” though up to now the ECB has guided that it regards bond purchases and other non-conventional tools as the preferred instruments.”

What of the outlook beyond the next couple of years? It was the summer of 2011 when the ECB last increased interest rates.According to Barry : “ Current thinking on the economic outlook suggests the current period of “lower for longer” interest rates has - potentially considerably - further to run.”

It can be dangerous to suggest that things have changed fundamentally. But perhaps in recent years they have.

In a seminar organised by the Royal Irish Academy this week , former Central Bank governor Patrick Honohan argued that interest rates have trended lower now for years , well before the latest ECB intervention, and that there was no reason to expect this to change.

Fundamental economic trends such as ageing populations and higher savings rates were key here, he said.

This has had huge benefits for the exchequer, he pointed out, with debt repayments taking one euro in every 12 of Irish tax revenue now, compared to around one in three in the early 1980s national debt crisis.

Low borrowing costs gave the exchequer flexibility to address the crisis, he said. At an Oireachtas Covid -19 committee meeting this week, NTMA funding director Frank O’Connor said that the downward trend in borrowing costs in the last five years had cut the average interest rate on the national debt from close to 4 per cent a year to 2 per cent.

In round numbers this saves the exchequer €3.5 billion in repayments each year.

This does not mean that interest rates will never rise from their current super-low levels. It just means that when they do rise they will not go as high as they did in previous cycles and may fall back to current lows, or close to them , in future recessions.

The average over the cycle appears to be falling. And for now O’Connor seems rates remaining very low for the “foreseeable future”.

As Honohan pointed out, Ireland’s borrowing reputation remains strong, though it will be a challenge to maintain this. The only risk over the next year or two would come from a loss of confidence in Ireland – or a wider group of countries – from international lenders due to the Covid-19 crisis.

For now, with the ECB in the market, this looks unlikely.

However some day interest rates will rise.The ECB will want to see inflation rising as the euro zone economy leaves the Covid-19 recession.

This would allow it to edge interest rates upwards, a move which it will see as essential to give it some firepower to respond to future downturn by cutting rates again. .

The next rise could well be a few years away, however and the key point for those taking on longer term commitments such as mortgages is that the peak of any conceivable interest rate cycle looks low.

For example the interest rate of the US central bank, the Fed, rose no higher than 2.25 per cent after the last crisis, before falling back to 0.25 per cent now. At previous peaks, it was over 5 per cent in 2006 and over 6 per cent in 2000.

For the State – and other countries – it opens up the possibility of raising significant sums at cheap rates to meet the one off cost of the coronavirus.

While taxes will have to be found to meet ongoing recurring costs, countries may move into the future with persistently higher debt levels and also, perhaps, higher deficits – at least on average through the economic cycle.

The mix of economic growth and interest rate levels will determine the possibilities here.They are not limitless, but they are significant.

For individuals, the cost of borrowing looks set to remain low, albeit that rates here will remain above EU norms.

Part of this is due to capital rules applied to Irish banks and part to the difficulty of making repossessions here, where court processes are slow and policymakers have decided to protect homeowners. More competition could still drive rates down, a bit – but for now this is likely to be concentrated on lower LTV loans and ones judged to be lower risk.

Fixed term mortgage are more common and lower long term rates on the markets may increase their availability and stretch out the time frame for which people can fix. This is an issue the new government has promised to examine.

Savers, however , face a poor outlook. Banks will continue to pay little or no interest and may make it more difficult for savers as holding cash is costing them too.

Those seeking a return will be pushed to take risk – via market linked products, direct share purchases or property plays – or to lock their money up for a period to get a return.

The era of super low interest rates, once seen as an aberration, is here to stay.

Is there an issue you want examined? ASK NOW