Manufacturing less damaged by Covid-19 than many predicted

CSO figures show output was down 11.6% in May in year-on-year terms 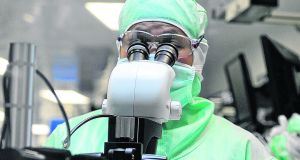 The “modern” sector, which includes the State’s giant pharma and IT industries, recorded a fall in production of just 4.7% in May

The State’s manufacturing sector has been less damaged by Covid-19 than many predicted.

Figures from the Central Statistics Office (CSO) show manufacturing production was 11.6 per cent down year-on-year in May when most of the economic restrictions curtailing movement were still in place.

The “modern” sector, which includes the State’s giant pharma and IT industries, recorded a fall in production of just 4.7 per cent in May.

The “traditional” sector, which includes food and forestry, however, recorded a 27 per cent fall in production.

Industrial production in manufacturing industries here for the three months to May was also 10.4 per cent higher than in the preceding three-month period.

Trade figures show goods exports spiked in March before falling back in April as companies initially positioned their stock abroad in anticipation of potential difficulties in shipping in the coming months.