Paschal Donohoe warns EU against giving up on digital tax 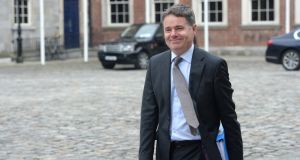 Minister for Finance Paschal Donohoe has warned the EU against giving up on a global initiative to extract more tax from digital companies as he makes his pitch to lead the group of euro zone finance ministers.

In an interview with the Financial Times, Mr Donohoe said negotiations between the US and EU at the Organisation for Economic Co-operation and Development (OECD) – which broke down last month – were on “pause”. He warned Europe against going it alone with a levy given the risk of stoking international trade tensions.

“We should see the current OECD process as being paused rather than stopped,” said Mr Donohoe. “We can already see trade issues developing. I believe the OECD offers the prospect of making progress on this [tax] issue without adding to the trade issues.”

The taxation of big tech companies has become an area of dispute between Brussels and Washington after the White House pulled out of long-standing OECD negotiations and warned it would retaliate against EU countries if they adopted their own levies.

The EU’s internal debate about taxation has also intensified as Brussels seeks ways to raise cash to repay hundreds of billions of euro needed to fund the continent’s recovery from the pandemic. Both the European Commission and countries led by France have urged the EU to revive its moribund plans for a Europe-only digital tax after talks between finance ministers collapsed in late 2018. But a sizeable number of governments – including those in the Nordic countries, the Netherlands and Luxembourg – have opposed an EU-only solution and want to keep the OECD talks alive.

Taxation is a particularly sensitive topic for Ireland since US tech companies such as Facebook and Apple are domiciled in the country.

If he wins the contest to become the next head of the eurogroup of finance ministers, Mr Donohoe’s new role would require him to act as an honest broker on a revived EU digital tax plan and other planned levies put forward by the commission, including a tax on businesses operating in the single market.

Mr Donohoe said the future of EU tax policy was an “active debate” among finance ministers. “Every different country has their own views in relation to what is one of the sensitive topics on the European agenda. Concerns or views that we have in relation to the future of tax policy, other countries have as well,” he said.

He said Ireland’s competitive corporate tax system – which has helped it recover from the financial crisis – had to exist “inside a certain and legitimate global and European framework”.

“Ireland has been part of that journey, in particular in the last few years, and we will be in the future”, said Mr Donohoe, who this week was reappointed as Minister of Finance in the coalition Government.

Euro zone finance ministers will pick the successor to Mário Centeno of Portugal in a secret ballot next Thursday. Mr Donohoe has cast himself in the role of a bridge builder, pointing to Ireland’s transition from being the recipient of a bailout during the sovereign debt crisis to a fast-growing, net contributor to the EU’s budget.

Mr Donohoe is part of an unpredictable contest in which he will be up against Spain’s centre-left minister Nadia Calviño and Pierre Gramegna, the finance minister of Luxembourg.

Mr Donohoe has the advantage of being the chosen candidate of the EU’s powerful centre-right European People’s Party coalition, while Ms Calviño is seeking to rally support from fellow socialists who are determined to keep hold of the post following Mr Centeno’s departure. Mr Gramegna has also sought to portray himself as a consensus builder, having run to be eurogroup president in 2017.

Mr Donohoe said the euro zone foundations had been strengthened by decisions made after the financial crisis and the bloc was better equipped to deal with economic downturns as a result.

But he warned the EU economy could suffer a “double shock” in the second half of 2020, as the pandemic could yet coincide with a very disruptive form of Brexit. Ireland has privately asked the EU to take account of potential Brexit dangers as it engages in talks over the forthcoming seven-year EU budget and recovery fund.

Asked whether he wanted to see changes in the plans to better support countries that get hit by a hard Brexit, Mr Donohoe said he was well aware of the sensitivities surrounding the so-called allocation key that will determine how much recovery money individual countries receive. “Every different member of the euro will have a different view in relation to this,” he said.

He warned there was now a risk of the shock of handling Covid-19 being “overlaid by the prospect of a shock created by a very disruptive form of Brexit happening”. The key question was “what kind of [future relationship] agreement can be reached and what is the breadth of that agreement”, he said. – Copyright The Financial Times Limited 2020.

Covid to hit housing, pay to remain flat and a very Irish hybrid 06:40
Governments must plan how we will return to normal as more people are vaccinated 06:00
Post-Brexit red tape continues to stall deliveries 05:57
Professional salaries will be flat in 2021, says Morgan McKinley 05:35
Biden has promised to ‘restore the soul of America’ but what might that mean for Ireland? 05:30