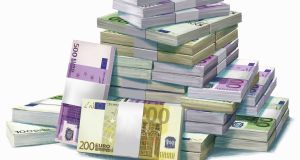 The National Treasury Management Agency (NTMA) sold €1.5 billion of bonds on Thursday, mainly at negative rates, as it continues to build up the Government’s resources to deal with the Covid-19 crisis.

The latest bond auction brings to €20 billion the amount the NTMA has raised on the long-term debt markets so far this year, meeting the bottom end of the €20 billion to €24 billion funding target it set in May to help deal with soaring cost of the health system and economic costs resulting from the pandemic. It had originally only planned to raise €10 billion to €14 billion this year.

On Thursday, the NTMA sold €500 million of bonds due in 2027, with the notes carrying a yield of minus 0.257 per cent, meaning buyers of the securities are paying the Government for the privilege of taking their money. Much of the government debt across the euro zone is yielding negative rates as a result of extraordinary European Central Bank bond-buying programmes.

The NTMA also sold €700 million of 2030 bonds to yield minus 0.025 per cent, as well as €300 million of 2050 securities, which were priced to yield 0.602 per cent. Investor appetite for the bonds was robust, with demand coming in for the three classes of bonds representing between 1.72 and 2.85 times the amount on offer.

The new Government is working on what Taoiseach Micheál Martin has called a “sizeable” stimulus package aimed at boosting domestic demand and employment. This follows the last administration committing about €9 billion to deal with the healthcare and economic crisis, as well as €7 billion of indirect supports such as loan guarantees and commercial rate deferrals.

Frank O’Connor, director of funding and debt management at the National Treasury Management Agency (NTMA), told the special Oireachtas committee on Covid-19 on Tuesday that the State is in a “strong position” to deal with a spike in borrowing requirements, a decade after it was forced into an international bailout.

Mr O’Connor highlighted how the exchequer returned to a primary budget surplus, excluding interest costs on debt, in 2014 and delivered an overall surplus for each of the past two years. The Government’s creditworthiness, which was rated as junk by Moody’s at height of the financial crisis, has recovered to an extent that another ratings firm, Standard & Poor’s, awarded it an AA-grade late last year.

The NTMA’s annual interest bill has fallen by more than 50 per cent over the past five years to €3.5 billion in 2019, as the average rate declined at a similar pace to less than 2 per cent, according to Mr O’Connor. This has been driven by the European Central Bank’s multi-trillion-euro quantitative easing programme and more easily its €1 trillion-plus response to Covid-19.

Speaking to the same committee, Central Bank governor Gabriel Makhlouf said: “The rise in the government deficit and debt ratios is both warranted and necessary /[to deal with the Covid-19 crisis/] and is currently affordable. But the high level of debt will leave government finances vulnerable to future shocks and it will be important for the Government to provide a clear and credible return to much lower and sustainable deficit and debt positions.”

1 ‘Saudi Arabia is where the opportunities will happen in future’
2 MSD buys Takeda biologics plant in Dunboyne
3 What will the office market look like after the great remote working experiment?
4 Scars from the crash give Irish banks 2.6 billion reasons for Covid caution
5 Refurbished Cafe en Seine doubled sales to €9.5m before pandemic
6 Identigen founders make €12m each from sale of company
7 Trump signs executive orders banning TikTok and WeChat
8 Wirecard was looted before collapse, German prosecutors suspect
9 State’s biggest landlord records 30% rise in rental income
10 Irish tourism must also help itself to survive the pandemic
Real news has value SUBSCRIBE